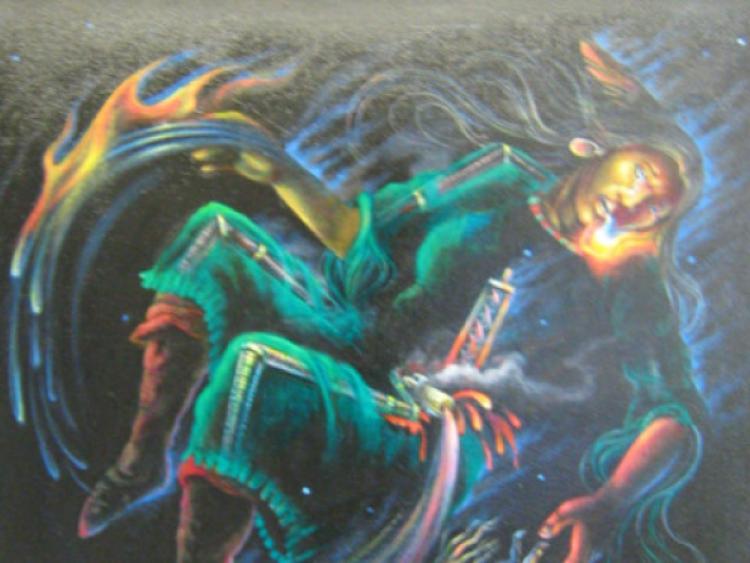 The Glens Centre, Manorhamilton will host a book launch and exhbition of Gary White Deer Author and Artist on Wednesday, May 22.

The Glens Centre, Manorhamilton will host a book launch and exhbition of Gary White Deer Author and Artist on Wednesday, May 22.

Gary White Deer, Choctaw artist, and author is a regular visitor to Ireland and has been a leader of the Afri Famine Walk on many occasions.

He was first invited to the Famine Walk in recognition of the generous donation of $170 by the Choctaw Nation given for Famine relief in Ireland in 1847.

Gary’s memoir “Touched by Thunder” was published in 2012 and Afri are pleased to co-host its first launch outside Dublin in the Glens Centre, Manorhamilton on Wednesday 22nd May at 6pm.

Simultaneously, there will be an exhibition of his paintings featuring among others ‘An Arrow Through Time’ an artistic representation of the Choctaw donation, ‘When Corporate Spuds Came to Ireland’ and ‘Fracking’, a graphic illustration of the potentially devastating effects of shale gas exploration.

Gary White Deer Choctaw, is an internationally known painter, tribal chanter and dance leader who has represented the Irish-Choctaw Famine link on many occasions. The link originated when the Choctaw, despite their meagre resources, sent $170 to Ireland for Famine Relief in 1847.

The second Choctaw donation to Ireland was presented by Gary Whitedeer to the community resisting Shell’s activities in Erris, Co Mayo in 2008.

Gary has made documentary film appearances on RTE, BBC and National Geographic Explorer, and most recently appeared on Fair City and Nationwide. Gary’s memoirs ‘Touched by Thunder’ was published in 2012.