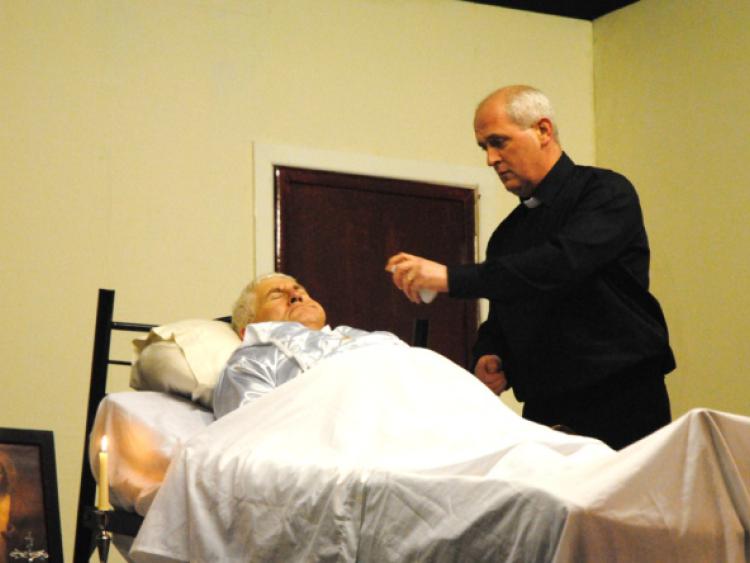 A Wake in the West, will be staged by the Elphin Players this Friday, October 11 at 8:30pm.

A Wake in the West, will be staged by the Elphin Players this Friday, October 11 at 8:30pm.

The three-act comedy by written by Michael Joseph Ginnelly is an hilarious play - the gags come thick and fast and a great night’s entertainment is assured.

The plot centres on the wake of Tom Healy, a man who was known to be ‘fond of a drop’. Tom’s controversial last request threatens to humiliate his family and make them the laughing stock of the small fishing village in which they live.

Not exactly an avid church-goer, Tom’s dying wish flies in the face of traditional religious ceremony in 1970’s Ireland. The priest and doctor need to be consulted, as does Tom’s son Martin who is returning from New York for the funeral (a return eagerly awaited by neighbour Joan who has held a candle for Martin since his departure to the States).

When conniving old neighbour Rose calls to pay her respects, the mayhem really develops and her antics set in motion a sequence of hilarious events.

Family friends and neighbours consist of an array of colourful characters who add to the general chaos.

All the cast are actors from Elphin and with her foresight and understanding of the comical, Helen Collins has achieved fine work as director and audiences will not be disappointed.

The play is on Friday, October 11 at St. Ronans Hall Keadue, Co Roscommon.