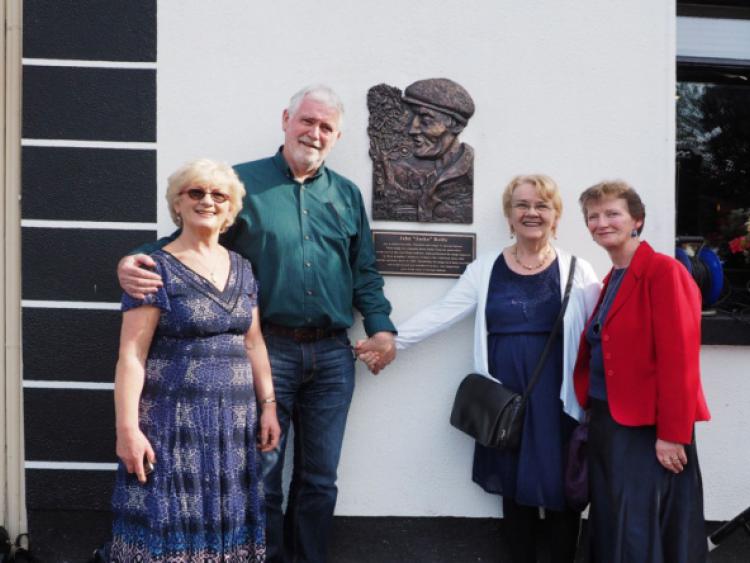 A Plaque for the late John Reilly, Traditional Singer was unveiled last Saturday, September 13 at Bruno’s Bar formally Grehan’s Bar on the Cresent in Boyle.

A Plaque for the late John Reilly, Traditional Singer was unveiled last Saturday, September 13 at Bruno’s Bar formally Grehan’s Bar on the Cresent in Boyle.

In June this year, Christy Moore and the Grehan Sisters played a tribute concert to the late great singer, proceeds went towards the creation of the plaque which was commissioned by Fergus Lyons.

John (Jacko) Reilly was born into a Travelling Family in Carrick-on-Shannon in 1926. Both John’s parents were singers and he learned the songs from them. In 1962, John’s mother and father died; he raised his siblings as best he could.

John worked around Boyle making bread tins for Egan’s Bakery on Green Street as well as buckets and billycans.

In 1969, Tom Munnelly of UCD and Professor D.K. Wilgus of the University of California, Los Angeles recorded John singing his old songs.

John sang 36 songs which were recorded. This was the last time that Tom Munnelly would hear John singing, a while later Tom Munnelly returned to Boyle and found John in his house suffering from pneumonia, he took him to Roscommon Hospital. A week later, John collapsed and was taken to Boyle Hospital; he died shortly after, aged 44. Tom Munnelly stated in his writings that John ‘Jacko’ Reilly was the best traditional singer he ever recorded.

The Grehan Sisters remember John breathing new life with the ‘Child’ Ballads that are now known to be at least 200 years old.

Recordings of John’s singing are held in the Folklore Section of UCD and The University of California, Los Angeles, USA under Professor D.K. Wilgus Collection. In 1978, an album called John Reilly – The Bonny Green Tree; was released by Topic Records. On this album John sings 14 songs, these songs were from Tom Munnelly’s recordings of John.

Christy Moore used the songs ‘Well Below the Valley’, ‘Raggle Taggle’, ‘Tipping it up to Nancy’, ‘Lord Baker’, ‘What Put the Blood’, and the ‘Navvy Boots’. When Christy informed the folklorists in England in 1967 that he got the song, ‘The Well Below the Valley’ (Francis Child’s Ballads #21), in the West of Ireland they didn’t believe him, because it hadn’t been sung in oral tradition in over 150 years.