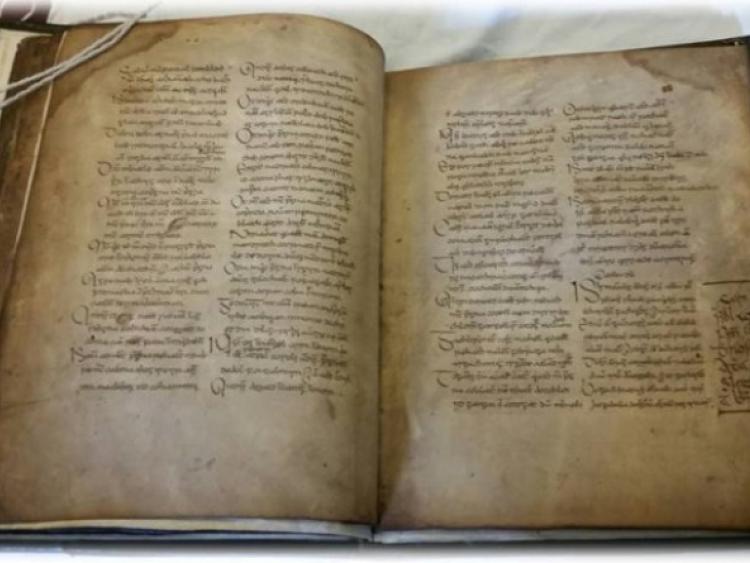 The year 2016 will be a big one for County Leitrim, not only will we be commemorating Sean MacDiarmada and the centenary of the The Rising but we will also celebrate the quincentennial anniversary of the writing of The Book of Fenagh.

The year 2016 will be a big one for County Leitrim, not only will we be commemorating Sean MacDiarmada and the centenary of the The Rising but we will also celebrate the quincentennial anniversary of the writing of The Book of Fenagh.

500 years ago Tadgh O’Roddy set out to update and improve the old Book of Fenagh with a new look manuscript containing new content in an effort to remind the country and its political leaders of the importance of Fenagh in a religious, political and historical context.

Five centuries on, the Royal Irish Academy (RIA) will publish a book ‘The Making of the Book of Fenagh’ in conjunction with Cumann Seanchais Bhreifne which will set out the historical importance of Fenagh. There will be a series of lectures, a festival and a commissioned sample replica of the Book of Fenagh to commemorate the anniversary next year.

A large crowd gathered in Fenagh Community Centre last Tuesday, August 25 to hear Dr Brendan Scott give a lecture and preamble into some of the in-depth essays to be published next year on the historical importance of Fenagh.

Dr Scott revealed that from the earliest times, Fenagh has been a significant settlement. This is illustrated by Neolithic (4000 BC) artefacts and other settlement remains. A standing stone in Knockmullen, a dolmen in Fenagh Beg, court cairns in The Commons and the monastic settlements give testament to the importance of the parish.

The two abbey structures are the historical remains most familiar to us today. The more elaborate abbey remains are probably from the 15th century, but it is clear from various other evidence that Fenagh was a place of monastic activity from the 5th century onwards.

The monastery has left us with the Shrine, the Bell of Fenagh and The Book of Fenagh.

The Shrine of St Caillin was a decorated book cover made in 1536, commissioned by Brian O’Rourke, King of Bréifne. The Shrine however, did not hold the actual Book of Fenagh. It was badly damaged in the fire at St Mel’s Cathedral, Longford 2009.

The Bell of Fenagh was a handbell in the monastery to call monks to rise and to prayers and meals. It was called Clog na Rí because it was supposed to have been used to baptise kings; inverted and filled with water. It remained in the possession of the Coarbs until the 1700s. It was destroyed in the fire at St Mel’s Cathedral.

Dr Scott said the Christian Abbeys were set up on original Pagan sites. People travelled on pilgrimages to Fenagh to see relics and to stay at local guest houses. The abbey would have run schools, hospitals and been a place of charity as well as a sacred ground for the burial of kings and chieftains.

The Book of Fenagh

An important role in monastery activity was the role of the comhard or lay manager, this position was held for generations by the O’Roddy family. In 1516 Tadgh O’Roddy commissioned the writing of the Book of Fenagh. Muirghis Mac Paidin Ul mhaolchonaire, of the scholarly family O’Maolchonaire near Elphin was commissioned to produce the Book of Fenagh. It was based on a collection of poems called the Old Book of Caillin.

The book is mostly in Gaelic verse attributed to St Caillin. Claims of the monastery to rents and payments as well as stories are freely mixed with historical fact to achieve its purpose. O’Roddys were Coarbs of St Caillin until the early years of the 19th century when it passed on to the last member of the family Brian O’Roddy, Parish Priest of Kilronan. At his death it passed on to the then Bishop of Ardagh, Dr. Conroy. It was bought in 1888 from Rev. Denis Murphy S.J. by the Royal Irish Academy for ten Guineas. It was published in 1875 and again in 1939.

The book is not quite a biography of St Caillin, it takes much content from the lives of other saints.

The book would have cost a lot of money to create, at a time when 99% of the population could not read. It was a symbol of political importance, wealth and respect.

Dr Scott said it was a “miracle it survived” and only lost 7 pages of the original 41.

Dr Scott said it was also lucky that it was sold to the RIA as the National Archives was blown up in 1922. The book would have also been written not long after Creevelea Abbey (1508) was set up, Fenagh was losing visitors and important people were being buried there, so the updated book was an attempt to claim back stature.

It was also important as a political struggle between neighbouring Chieftains Reynolds, O’Rourkes and Farrells were claiming land and Fenagh wanted to be left alone and shown the respect it deserved.

Dr Scott said the book is “unique” as it does not toe the line with other books of the time.

St. Caillin founded a famous monastic settlement in Fenagh in the 6th century. He was born in Galway and came from the Conmaicne Tribe, which originally inhabited an area in East Co. Galway.

Legend has it that an angel was sent to Caillin to show him the site of the Abbey at Fenagh. The old story also says Caillin turned Druids into stones. There are many fables surrounding St Caillin, but Dr Brendan Scott said many of the stories have also popped up in other stories of saints around the country, so they have been borrowed!

On his deathbed Caillin said anyone who was buried in Fenagh Abbey will go straight to Heaven. St Caillin’s mortal remains are in a vault attached to the wall of the Abbey. His feast day is celebrated on November 13.