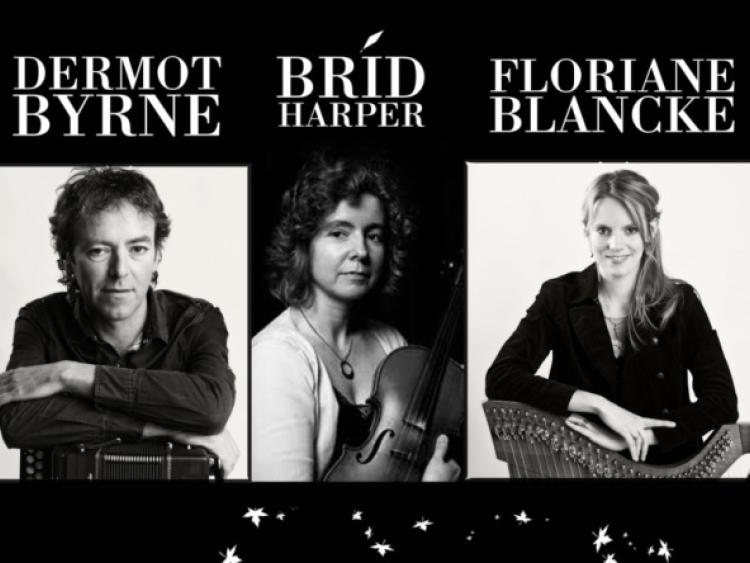 Three of Irish music’s greatest ever artists are set to headline at this year’s 6th Annual Ballinaglera Traditional Music Weekend beginning this Saturday October 3. This gig, simply not to be missed, will take place on Saturday night in the intimate surroundings of Ballinaglera Community Hall with a kick off time of 9.15pm. Doors open at 8.30pm. Admission of €15 includes refreshments.

Dermot is one of Ireland’s finest traditional musicians having been awarded the Irish Television station, TG4’s Traditional Musician of the Year 2013. He hails from Buncrana in the Inishowen peninsula, the most northerly part of Donegal, and has played accordion since a very young age, having learned from his father Tomás O’Beirn, who comes from the Teileann area of South West Donegal, and is an enthusiastic promoter of the tradition. Dermot had the good fortune to meet all the greats of Donegal music, including Johnny Doherty, Con Cassidy, Tommy Peoples, Danny Meehan and many more, and they made a great impact on the young Dermot, who went on to develop a very unique style. His seemingly effortless playing, combined with great subtlety, and a faultless ear, makes him one of the great accordion players of his generation. As well as his mastery of the Donegal style and repertoire, Dermot can turn with ease to other styles and traditions such as French musette, or South American choro music. He guested on two Altan recordings “The Red Crow” and “Island Angel” before joining the band full time in 1994.

Brid Harper is originally from Castlefinn, Co.Donegal and now living near Dungannon, Co. Tyrone. She has been hailed as one of the leading exponents of traditional fiddle playing of our time. She was senior All-Ireland Champion, Fiddler of Dooney and Oireachtas winner in 1988.

For the past couple of years she has been performing with great musicians including Dermot Byrne, Steve Cooney, PJ McDonald and many others.

Born in Paris, France, Floriane Blancke is a talented harpist, fiddler, pianist and vocalist who has been embraced into Irish Traditional music circles over the past numbers of years. The grand-daughter of Jazz musician Stanislas Suranyi, her music has been greatly influenced by this native Hungarian Gypsy style, and of her grand-mother Marthe Blancke, who was a classical French violonist. Floriane also studied classical music for 10 years in the conservatoire of Bordeaux before spending a few years studying Jazz and World music in the C.I.A.M Jazz School. After moving to Ireland from France to pursue a full-time career in Traditional Music in 2006. Floriane is now recognised as a skilled harpist and has performed with luminaries such as Sharon Shannon, Brid Harper, Steve Cooney, Paddy Keenan, Pierre Schryer, Seamus Begley, andTim Edey. While, for the most part, Floriane’s collaborations are traditional, she has shown her versatility in sharing the stage with contemporary artists such as Shane Mc Gowan of the Pogues and the world renowned vocalist Patti Smith.

Elsewhere on the programme Ballinaglera welcomes some of the finest traditional artists in the country; Louise Devitt (Sean Nós Dance and Flute), Enda McGreevy (Fiddle), Cein Sweeney (2015 All Ireland Flute Champion), Jacqui Martin (Fiddle), Lorraine Sweeney (Flute), Oliver Loughlin (Piano Accordion), Breda Shannon (Concertina) and Fergus Bogue (Button Accordion). There is also a youth session taking place at 6pm on Sunday in Mulvey’s public house featuring the young stars of the present and world champion Miss Louise Devitt will be hosting a special Sean Nós Dancing workshop, for all ages, on Sunday in the Community Hall at 2pm. Admission is only €5.

If traditional music, song and dance, at its best, played in the most traditional of surroundings, coupled with a warm welcome, is to your liking, then picturesque Ballinaglera on the shores of Lough Allen is the place to be this weekend. See you there! Check out page 8 of this week’s Observer for full details!