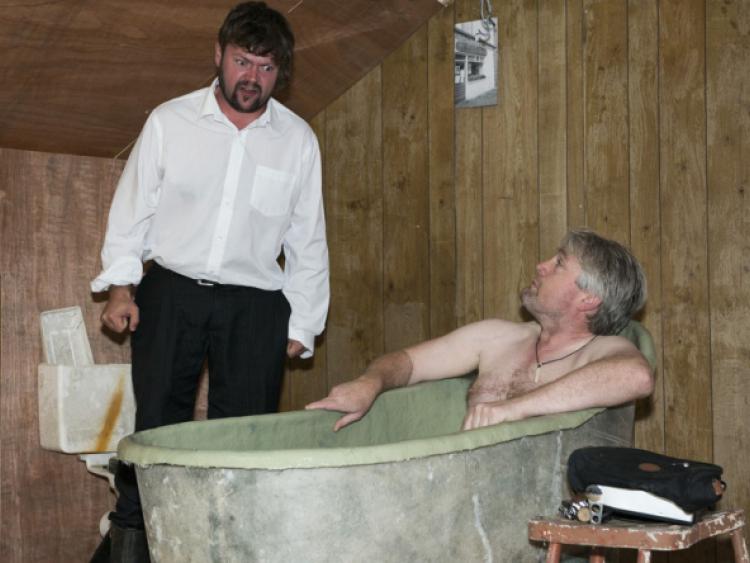 “Dirty, hilarious, shocking, poignant, with some nudity” is how I would describe ‘The Quare Land.’

“Dirty, hilarious, shocking, poignant, with some nudity” is how I would describe ‘The Quare Land.’

The new play written by Ballyconnell man John McManus, and performed by the master of script comedy Seamus O’Rourke and the refreshing Shane Carroll had it’s preview in The Corn Mill Theatre, Carrigallen on August 1. It opened to roaring laughter, water splashes, wild suspicions and gasps of shock in the packed out theatre.

For a new name on the local theatre block, John McManus’ script is something of a comedy and drama marvel. O’Rourke’s character 90year old West Cavan bachelor farmer Hugh Pugh is a true Mean Cavan Ba****d with a silly sense of humour and a greedy plan. Shane Carroll’s acting as Property Developer Rob McNulty is starkly realistic, his emotional performance and interpretation of desperation is quite haunting.

Although this reviewer got “a quare land” herself, after her surname and her native parish were insulted in the first act (Heaveys from Corlough beware), the production itself is comedy gold for those living in a rural area. Cavan and “Lay-trim” people will delight in this piece that includes some musical numbers, historical figures and outside the box comedy sketches.