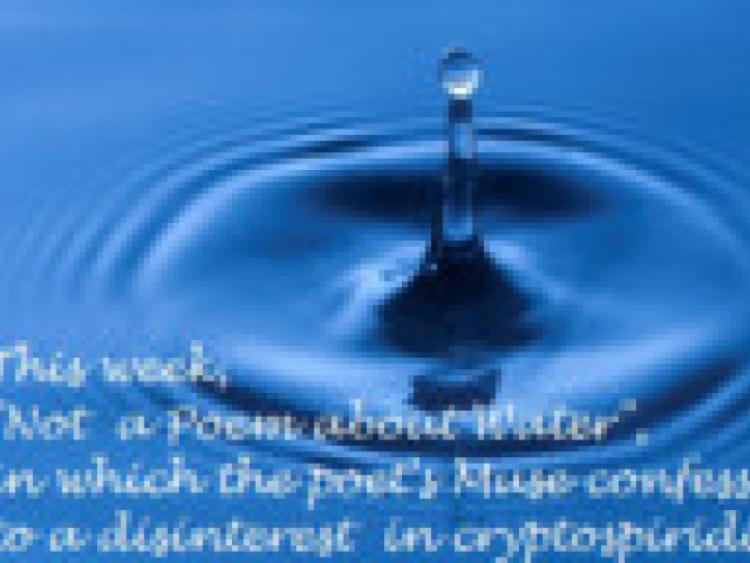 Frankie Smith taps the headline on the front page of the Leitrim Observer: BOIL NOTICE RENEWED.

Frankie Smith taps the headline on the front page of the Leitrim Observer: BOIL NOTICE RENEWED.

“You should write a poem about the state of the water in Roscommon,” he says. Frankie is the paper’s Content Manager.

I scour the headlines. There’s water everywhere – water meters, water bills, water protests – but my Muse is as dry as a proverbial stone.

“Not dry,” she corrects me, sipping from a glass of blood red wine, “just not interested in cryptosporidium.”

“The people of Roscommon are very interested,” I inform her, “and the country is in uproar.” But my Muse has decided to paint her toenails. I google in search of a juicy quote to tempt, offer her Eleanor Roosevelt: “A woman is like a teabag – you can’t tell how strong she is until you put her in hot water”.

My Muse smiles, sips her wine, angles her left foot for the scarlet treatment.

I scroll down. “How about this? ‘Water flows uphill, towards money.’”

“Who said that?” she asks, glancing at the screen.

I click. “Anonymous. From the American Midwest.” I can tell that her attention is not entirely on her toenails. I click again.”Quoted in ‘Water Wars: Privatisation, Pollution and Profit’. By Vandana Shiva. South End Press.”

She peers over my shoulder at an image of an Indian woman in a wine­coloured sari with a bindi on her forehead. “More,” she demands.

“Water must be free for sustenance needs... Everyone has a duty to conserve water and use water sustainably, within ecological and just limits...”

“Too right. Water for survival should be free. But don’t think it costs nothing just because it droppeth as the gentle rain from Heaven. Pay what’s needed, do what’s needed, keep it flowing in the pipes, sweet and clean.” She screws the cap onto the bottle of nail varnish. “What else?”

I’m tempted to remind her of cryptosporidium, but I know not to interrupt her when she’s on a roll.

“Here’s a review of ‘Water Wars’ by Dustin van Overbeke,” I offer.

She’s cleans a smudge off the outer edge of her right little toe. “What does he have to say?”

“A bit dry,” she says, sipping her wine, “but old Dustin knows his H2O. Privatisation – that’s what this referendum­thingy is about, is it? What they were calling for on the radio – water belongs to the people, no privatisation of water, not now, not never? I’ll vote for that.”

“Not get to vote? Don’t be daft. Is he cute? Old Dustin?” She peers over my shoulder: “Click on Images.”

But I’ve found something else. “Here’s one you’ll like – another review of ‘Water Wars’, this one by a

“There you have it!” she hollers, threatening my left eardrum. She reaches over my shoulder, clicks the mouse. “Hmmm. Very nice. He looks like a man who knows his Muse from his marbles. Hold this, will you?” She hands me the empty wine glass, blows warm breath on her toenails. “I’m off to visit Mr Markides. I’ll be back in a week. Don’t wait up.”