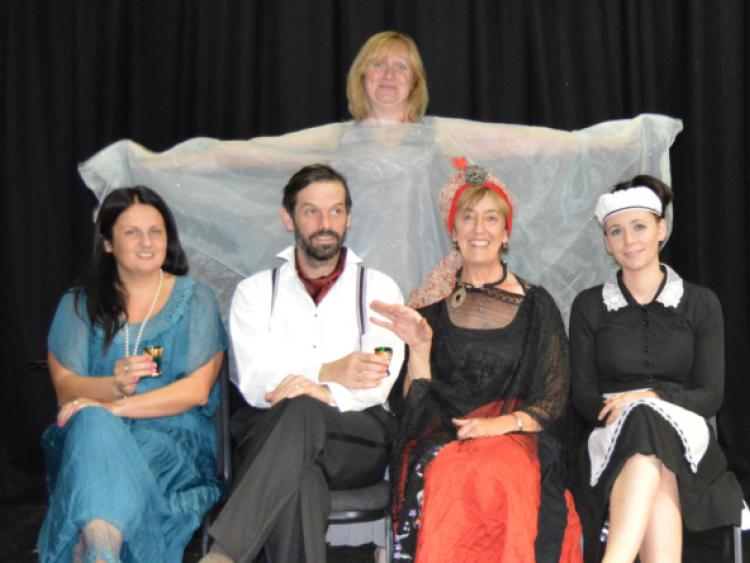 What do you do as a playwright in war torn Britain? You write a comedy about ghosts and seances.

What do you do as a playwright in war torn Britain? You write a comedy about ghosts and seances.

That was the background to Noël Coward’s comedy genius “Blithe Spirit” now to be brought alive by Splodar Theatre Company this Friday September 19 in Kiltyclogher Community Centre.

Coward, always seen as a colourful and unconventional character wrote a play that has ably stood the test of time. It’s said he wrote it in 6 days.

The first audience at its premiere walked on planks over rubble caused by an air raid. Never to be daunted by the real world creeping in Coward mocks death by creating a piece where ghosts of first wives summoned up by a seance play havoc on second wives, with a wise cracking husband caught in the middle of the commotion.

The play concerns the socialite and novelist Charles Condomine, who invites the eccentric medium and clairvoyant, Madame Arcati, to his house to conduct a séance, hoping to gather material for his next book.

The scheme backfires when he is haunted by the ghost of his annoying and temperamental first wife, Elvira, after the séance. Elvira makes continual attempts to disrupt Charles’s marriage to his second wife, Ruth, who cannot see or hear the ghost.

It proved a popular success running to 1,997 performances in the West End of London.

Splodar company’s adaptation has played to full houses at The Glens Centre, Manorhamilton and now play in St Brigids Hall in Tubbercurry on Thursday 18th, 8.30pm and in Kiltyclogher Community Centre Friday Sepember 19 at 8.30pm, where proceeds go to the Love Leitrim group.