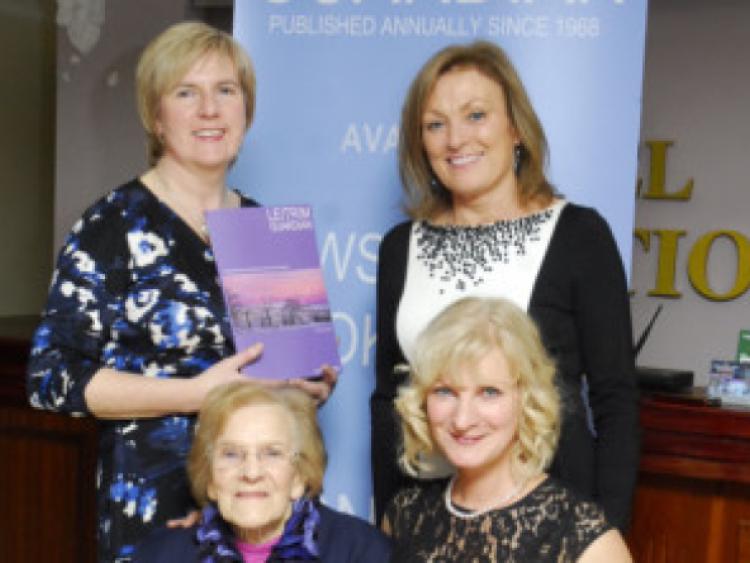 A large crowd packed out the Standing Stone Hotel, Ballinamore for the launch of the 46th edition of the Leitrim Guardian, Ireland’s only annual county journal published entirely by voluntary effort.

A large crowd packed out the Standing Stone Hotel, Ballinamore for the launch of the 46th edition of the Leitrim Guardian, Ireland’s only annual county journal published entirely by voluntary effort.

Arigna author Brian Leyden was the guest speaker and he congratulated the “supremely talented, gorgeous and gracious Eleanor Shanley” for being selected as Leitrim Guardian Person of the Year 2014.

He praised the Guardian for it’s literary importance in the county. He said the stories, pictures, poems and songs produces an “emotional responsiveness.” He said the Leitrim Guardian is an “archive of life in Leitrim.”

He praised Editor, Dr Bláithín Gallagher and the committee for their hard work and everyone who submitted work

Dr Gallagher presented awards to a number of literary award winners including Angela McCabe who won the first prize in poetry, William Burns who was awarded the Leonard Perpetual Trophy and the MJ McManus Literary Award, and Séan McPartlin who won the Leitrim Guardian Literary Award .

Dr Gallagher congratulated Eleanor Shanley and commented that the powerful singer has been a great ambassador for the county through her music and charity work.

Eleanor told the large crowd of over 200, “I started this speech 30 years ago when I thought I was a shoo-in for the Leitrim Rose!”

She said is “so proud of being from Leitrim” and she meets great Leitrim people everywhere she goes.

Eleanor sang a number of songs with musician friends and asked that we keep it “Frack free Lovely Leitrim.”

The 46th edition of the Leitrim Guardian is available for purchase in shops locally for €12 and is also available to purchase online at www.leitrimguardian.ie.

The magazine makes a superb present for those at home and abroad. It brings together beautiful pieces of literary works with reports of important events that occurred in the county over the past 12 months, historical features and stunning pictures of Leitrim and it’s great people.