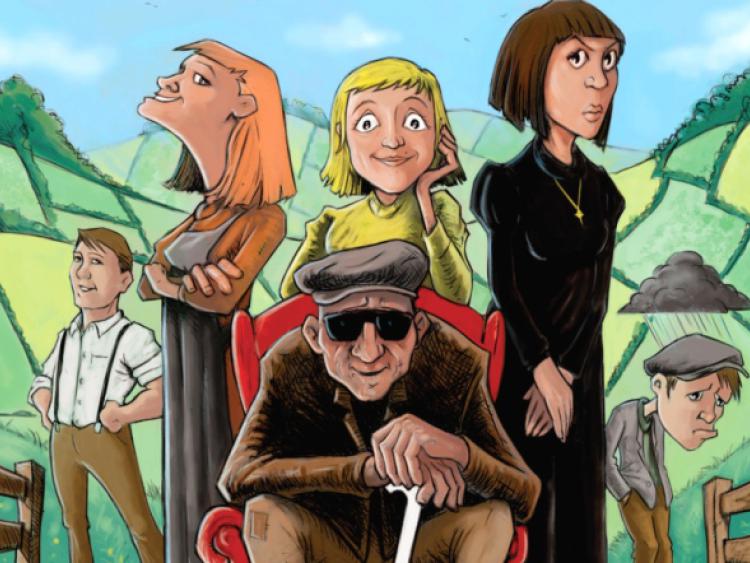 Loco and Reckless Productions in association with Nomad Theatre Network presentThe Far Off Hills by Lennox Robinson and directed by Mikel Murfi in the Hawk’s Well Theatre, Sligo on Friday 21 November.

Loco and Reckless Productions in association with Nomad Theatre Network presentThe Far Off Hills by Lennox Robinson and directed by Mikel Murfi in the Hawk’s Well Theatre, Sligo on Friday 21 November.

A hilarious tale of scheming siblings, love and general jiggery-pokery, Lennox Robinson’s “The Far Off Hills” is set to embark on a national tour and opens at the Hawk’s Well Theatre on Thursday 20th of November at 8pm where it runs for two nights. Directed by Mikel Murfi, the production stars Steve Blount (Moone Boy, HBO’s Game of Thrones), Caoimhe O’Malley (Reign), Julie Sharkey (Fair City) and Sligo woman Niamh McGrath (Calvary).

Set in a sleepy town in rural Ireland, where the far off hills are green, everything is set to change in the lives of Patrick Clancy and his three daughters, Marian, Ducky and Pet. The oldest daughter, Marian, feels duty bound to postpone her entry to the convent until her father has his long-awaited cataract operation.

Marian rules the household strictly, much to the dismay of Patrick and her more fun-loving younger sisters Pet and Ducky. Harold Mahony, one of the greatest moaners in Ireland - ever, has his sights set on the blissfully unaware oldest daughter. All is set to change however, with the arrival of the energetic young and devilishly handsome, Pierce Hegarty. Feeling left out in the cold by Marian’s admirers, the two younger girls hatch a plan to get rid of their older sister which ends with unexpected results.

This revival of Lennox Robinson’s classic comedy from 1928 is given new life under the direction of award-winning Mikel Murfi (creator of The Man in the Woman’s Shoes). Set and costume design is by Sabine Dargent and lighting design by Nick McCall.

Lennox Robinson was born in Douglas, Co Cork in 1886. He was a dramatist, poet, theatre producer and director. His first play, The Cross Roads was performed in the Abbey Theatre in 1909. He became Manager and Director of the theatre towards the end of that year, following the death of J. M. Synge. He resigned in 1914 but returned to the Abbey Theatre in 1918 as manager and producer, and was appointed to the board of the theatre in 1923. He spent many years as director of the Abbey School of Acting.

He continued to write many plays throughout the 1920s, 1930s and 1940s. During this period he wrote The Big House (1926), The Far Off Hills (1928) and Drama at Inish (1933), which, when it transferred to Broadway, was called Is Life Worth Living? He edited Lady Gregory’s Journals (1946) and The Oxford Book of Irish Verse with Donagh McDonagh (1958). In 1951 Lennox Robinson published Ireland’s Abbey Theatre, the first full-length history of the company. He remained on the Abbey board until his death in 1958.

In his will Lennox Robinson bequeathed his estate to his wife and determined that on her death the copyright would pass to the National Theatre Society Limited, now the Abbey Theatre.

His wish was that the copyrights assigned to the Abbey would be held as a trust fund to be called The Lennox Robinson Trust.

The Trust was to be used “in aid of the following persons: Playwrights, Players, Producers, Stage Designers and Stage Musicians, Any Other Servant of the Theatre.”