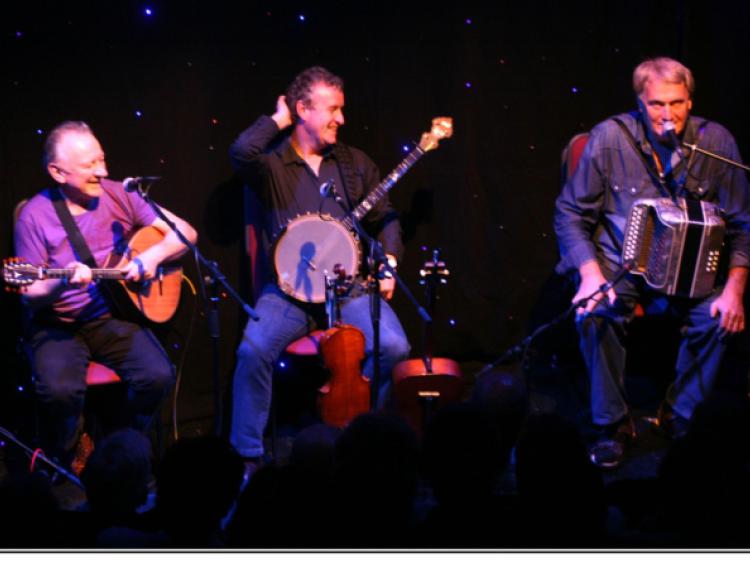 Dónal Lunny, John Carty and Séamus Begley will be joined by twenty of Leitrim’s finest musicians in the Bush Hotel on Saturday, October 19.

Dónal Lunny, John Carty and Séamus Begley will be joined by twenty of Leitrim’s finest musicians in the Bush Hotel on Saturday, October 19.

Dr Sandra Joyce Acting Director of the Irish World Academy of Music and Dance at the University of Limerickwill launch the album at 7pm, and the concert starts at 8.30pm.

The concert, which is supported by Waterways Ireland, is the culmination of a residency by legendary traditional musicians Dónal Lunny on bouzouki and guitar, Séamus Begley on accordion and vocals, John Carty on fiddle, banjo and tenor guitar along with special guest, Leitrim native and 2012 TG4 Musician of the year, Brian Rooney over the last eighteen months. In 2006, Leitrim County Council Arts Office devised a programme called ‘The Leitrim Equation’ where Ireland’s most talented trad music groups were invited to spend time in Leitrim working with musicians and groups. The first two residencies were led by Lúnasa and Dervish.

‘The Leitrim Equation 3 CD consists of a selection of tunes by composers from, or connected with Leitrim from as far back as O’Carolan, to Joe Liddy, to present day masters such as Charlie and Maurice Lennon as well as newly composed tunes by the group and other local musicians. Over twenty musicians, some with special connections to London. The concert will include the above named with Niall Keegan, Eleanor Shanley, Ben Lennon, Michael O’Brien, Edwina Guckian and many more for a night that promises to raise the roof off the Bush in a celebration of Leitrim Music. This is the conclusion of the Leitrim Equation project. Tickets are €15 and they can be booked through The Dock by calling 071 96 50828. For further info: www.thedock.ie.