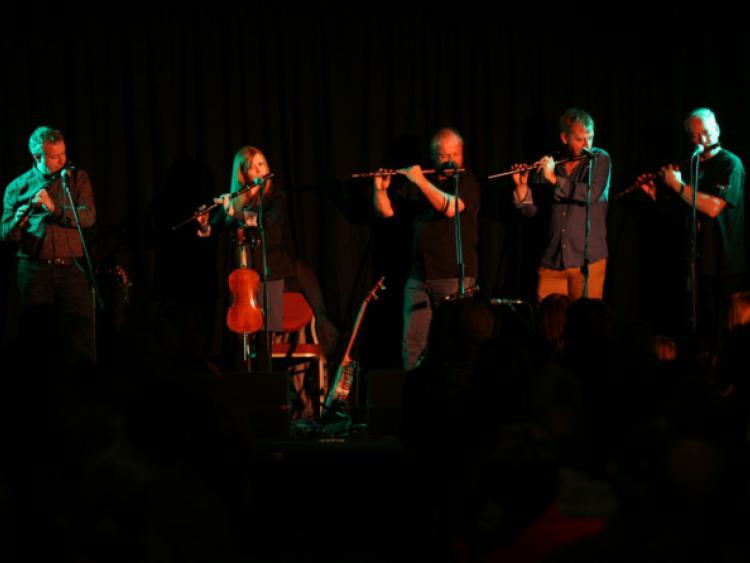 The Leitrim Equation 3 Gala Concert in the Bush Hotel on October 19 burst into tune with a flourish as Dónal Lunny, John Carty and Séamus Begley took to the stage with a blast of reels followed by a set of Leitrim polkas from the repertoire of John McKenna.

The Leitrim Equation 3 Gala Concert in the Bush Hotel on October 19 burst into tune with a flourish as Dónal Lunny, John Carty and Séamus Begley took to the stage with a blast of reels followed by a set of Leitrim polkas from the repertoire of John McKenna.

This set the tone for the evening as the group played tunes and songs they had learnt during their 18 months in Leitrim. The packed audience were treated to a virtual tour of the county as the group introduced musicians and singers they had met on their travels from the north to the south of the county. The group’s rendition of ‘Sí Bheag Sí Mhór’ was one of the most elegant and graceful versions you’re ever likely to hear with the guitar, fiddle and accordion of the three musicians complimenting each other perfectly.

Ben Lennon and his son Brian were given a great warm welcome and there was laughter from audience and stage in response to Ben’s witty story telling. Every subsequent set appeared to be the highlight of the night: Fionnuala Maxwell’s newly composed song, about the blight of emigration brought a tear to many an eye. Rachel McGovern, on accordion, played ‘Kilty House’ a gentle and evocative tune she composed herself in remembrance of her grandparent’s home in Kiltclogher followed by Tommy Guihen’s powerful, heart stopping solo reel set on flute. The first half finished with a fanfare of flutes as the Leitrim flute players took to the stage with a rousing selection of John McKenna tunes.

The second half included two excellent sets by Lisa Ward on fiddle from Aughnasheelin and banjo player Alan Reid from Killargue. Both musicians sounded tremendous and were accompanied beautifully by Dónal Lunny on bouzouki. Eleanor Shanley was introduced as ‘Leitrim Person of the year’ sang a song about her own home town, Keshcarrigan accompanied on guitar by John McCartin. Padraig McGovern played a beautiful solo followed by a set the group had worked up with him in the months before. The night culminated with a nostalgic rendition of ‘My Own Leitrim Home’ by songsters Fionnuala and Eleanor. Edwina Guckian did sean nós dancing on a barrel at the front of the stage bringing the curtain down on a fabulous evening’s entertainment.

The full cast of performers travelled to London to play the Return to Camden Town Festival on Sunday, October 29. They were joined by Brian Rooney, Niall Keegan and Vincent Woods. The Leitrim Equation 3 CD is now on sale in usual outlets and will also be available to buy on-line shortly. For further info visit www.leitrimequation.ie or contact Leitrim County Council Arts Office on 071 96 21694.