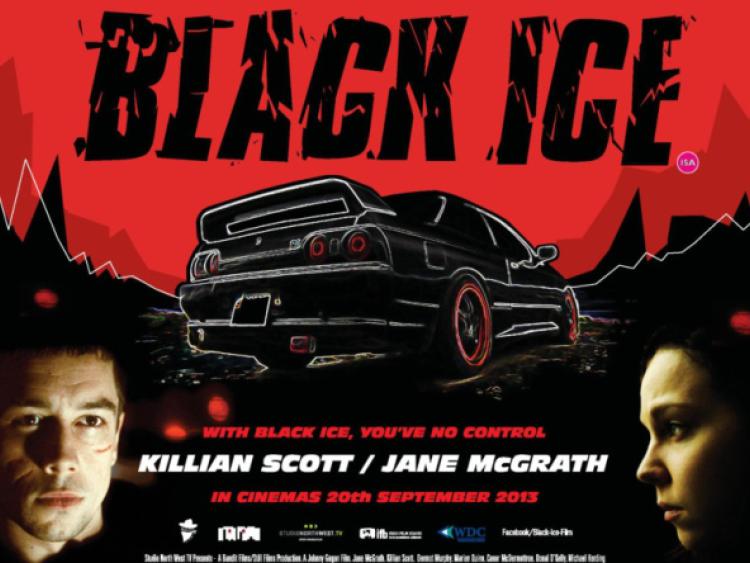 The locally filmed Black Ice has been the top film in Carrick Cineplex all week and is performing strong nationwide.

The locally filmed Black Ice has been the top film in Carrick Cineplex all week and is performing strong nationwide.

Although promoted as a rally/ boy racer film, Director and Co-Writer Johnny Gogan describes it as a “border thriller” with a focus on community and in the backdrop of the financial crisis in Ireland. Night racing, doughnuts galore and flashy spoilers are a big feature but of course this film cannot compete against $160 million budget of movies like Fast and Furious! Johnny said the budget for Black Ice was a “fraction of a million euro.”

The story of youthful misadventure which charts the story of Alice (newcomer Jane McGrath) as she is seduced into the rhythmic rumbling world of local boy racers and the growling engine of Jimmy Devlin (Love/Hate’s Killian Scott) opened in cinemas last Friday, September 20. Johnny said the reaction has been great especially for the host of young emerging actors. There are also a number of well known creative Leitrim faces in the movie.

The film took 3.5 weeks to shoot and the scenes of Dromahair, Manorhamilton and Trotter’s Quarry really do draw you in. The rally cars are locally sourced and Johnny praised the huge support the film received locally.

The actors, the scenery and the content are all dark, winter themes and Johnny said this reflects the mood of the country at the moment.

The aim from here is to keep the film as long as possible in cinemas across Ireland, to bring the movie out on DVD and to try and promote it internationally.

Black Ice is just one of the films shot and created within in the county in the past 12 months.