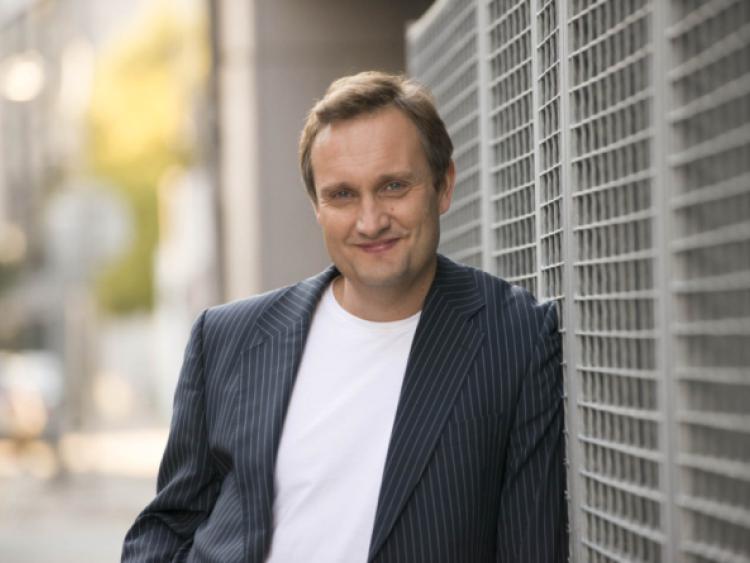 He has been an essential part of breakfast time for many households over the past 15 years as he helps the people of Ireland prepare for work or school with a smile on their face and now Mario Rosenstock is preparing to visit Leitrim for the first time.

He has been an essential part of breakfast time for many households over the past 15 years as he helps the people of Ireland prepare for work or school with a smile on their face and now Mario Rosenstock is preparing to visit Leitrim for the first time.

Mario will bring his show, ‘Gift Grub Live 3’ to Carrick-on-Shannon’s Landmark Hotel on Friday, November 7th on what will be his first time in the county.

His show will consist of many of the voices that have become so popular on Today FM’s Ian Dempsey breakfast show since 1999 and he revealed there are many more that he has been working on in preparation for this tour.

As well as all the favourites, Mario added there will also be an element of interaction in the show and even during our brief telephone conversation it was evident that as he was learning more about the county he was trying to think of ways to incorporate various aspects of the county into the show.

Mario describes the show as “very fast moving and very exciting. The show was written in February and then there were 19 dates and the response was so good there were more dates added, some in places I hadn’t been too before.”

On the afternoon of our conversation, Mario was preparing for a show in Carlow, which he was also visiting for the first time.

“It is a breath of fresh air,” he acknowledged. “I think there is a sense of slight appreciation that you are going to an area you mightn’t otherwise be going to.”

Such has been the impact of Mario’s impersonations, should you bump into Keith Lynch or Roy Keane most people would expect Lynch to salute you with a “Howaya buddy” or Keane to sarcastically laugh in the most ridiculous manner.

Mario is well aware that the caricatures he has created could be mistaken for the real person’s personality but he believes that sort of humour, when it is done without malice proves to be very popular in Ireland.

“They are caricatures of real people. It is satire, a form of lampooning and there is a great appetite for that. Nobody does that better than here in Ireland and over in England, we love taking people down a peg or two.”

“You can be nasty or you can be clever and I prefer to be the latter.”

After so many years of re-inventing how household names are perceived Mario admitted it is the new characters he enjoys performing most in front of live audiences.

The likes of Francis Brennan, Christy Moore, Bono and the Edge will feature prominently while Marty Morrissey, with “full-on make-up”, will be attempting to seduce the best looking member of the audience, Louis Walsh will be creating a boyband in Carrick-on-Shannon and Enda Kenny will be in the house to re-work the hit “All about the bass” which has been renamed, “All about me mates.”

Gift Grub Live 3 features some of Ireland’s favourite characters in action, Christy Moore highlights a few things that have been bugging him lately, Francis Brennan reveals some behind the scenes secrets from the 5 Star hotel world, and Roy Keane’s whole life flashes before his very eyes.

And, at last, the Gift Grub Live 3 stage also introduces the one character nobody has ever really met before – Mario Rosenstock himself!

“The latest Gift Grub Live Tour is following its wildly successful predecessor’s footsteps - the 2010 & 2012 Gift Grub Tours sold out with sales of over 100,000 tickets!

Tickets priced €35.00 including booking fee, are on sale now from Ticketmaster and The Landmark Hotel.