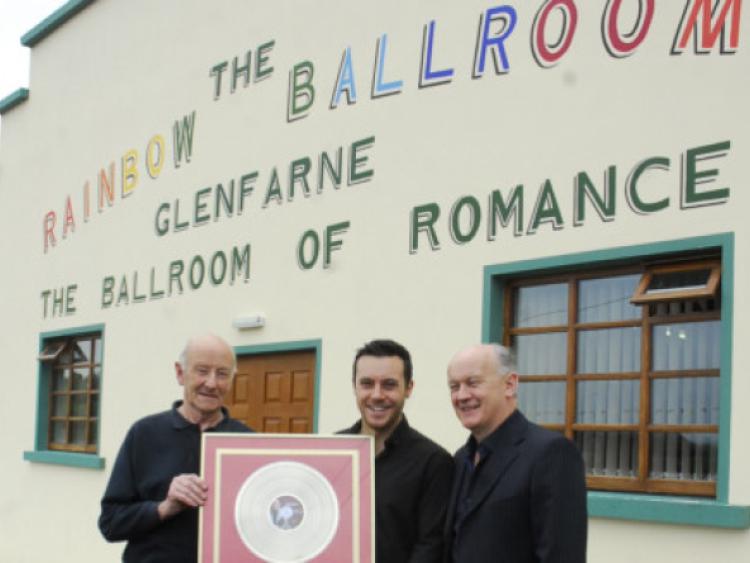 Nathan Carter, the McGivern family and over 50 Kerry visitors were present in the Ballroom of Romance, Glenfarne on June 26 to launch the ‘Rainbow Experience.’

Nathan Carter, the McGivern family and over 50 Kerry visitors were present in the Ballroom of Romance, Glenfarne on June 26 to launch the ‘Rainbow Experience.’

The experience is part of the development of the Rainbow which has seen the popular venue return to the live music circuit and it is hoped the centre will open a full time museum on the era of showbands, a time when the ballroom was the biggest talking point of the country.

54 people from Sean Chairde, a rural group in South Kerry were part of the crowd at the launch of the experience which includes DVD footage of the history of the Rainbow, exclusive and original showband memorabilia, photos and information about the ballroom and a talk from local experts as well as a chance to dance on the famous floorboards.

As part of the launch, heart throb Nathan Carter dropped in to present the Rainbow with a golden disc from the sales of the single he released “Rainbow in Glenfarne” which was written by local man John Farry. He said Glenfarne was “one of my first gigs and I played where my nan and granddad once danced, which was special.” He congratulated all involved and finished saying “here’s to the next 80 years in the Rainbow.” He returns to the Rainbow at the end of July.

Cllr Sean McDermott welcomed everyone and explained Big Tom couldn’t make the event for health reasons. He especially welcomed 80 year old Maureen McGivern wife of the late John McGivern who opened the hall back in 1934 and hosted a romantic interlude at every dance.

In the DVD Big Tom said Glenfarne “was one of the biggest and best halls to play in.” County Manager Frank Curran said over €500,000 went into the refurbishment and said it should attract visitors to the area. John Farry and Gerry Finneran who collected all the memorabilia on showbands and The Rainbow also spoke.

The experience also includes items for sale including badges, CDs, DVDs and part of the famous old floorboards for €5 a piece! Cllr Sean McDermott said the Rainbow is open to bookings for all groups and tours, he said they are in talks with some national tour bus companies and hope to open the museum full time as well as host more concerts and dances.