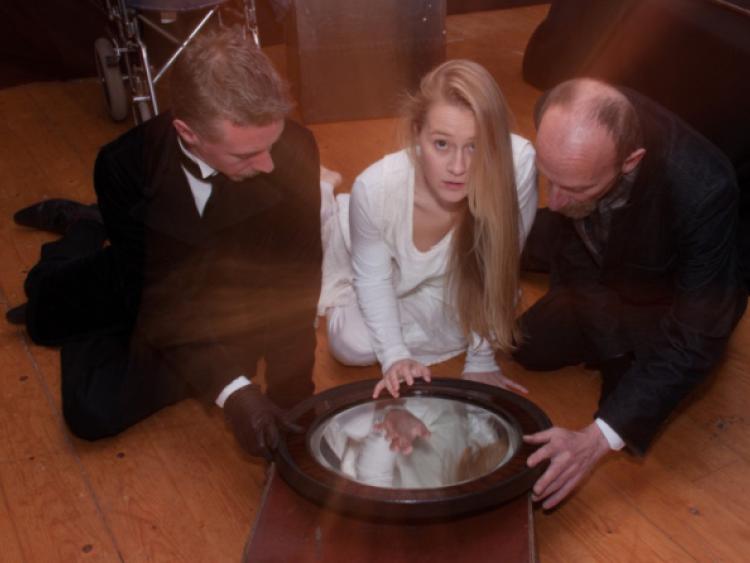 The Glens Centre is delighted to showcase the first performance of Beneath The Bone Moon, a new play by Patrick Karl Curley, before it goes to The Dublin Tiger Fringe Festival. The Glens has been supporting this production as it prepares for a week long run in Dublin.

The Glens Centre is delighted to showcase the first performance of Beneath The Bone Moon, a new play by Patrick Karl Curley, before it goes to The Dublin Tiger Fringe Festival. The Glens has been supporting this production as it prepares for a week long run in Dublin.

Beneath The Bone Moon is a dynamic performance work, an eerie urban myth, and a love letter to late-night horror films. The piece was created by Tintoretto Sect, a collective of artists based in Sligo and Leitrim, and will receive its national premier this September (13th - 19th in Boys School, Smock Alley Theatre) as part of the 2015 Tiger Dublin Fringe.

The performance tells the strange story of Thaddeus Edward Cain – an ancient figure who sits alone in his room with nothing but his dreams for company. When a stranger arrives, Cain is forced to question what is reality, what is fantasy, and what dark secrets lie Beneath The Bone Moon.

In advance of the Dublin premier, Tintoretto Sect will be treating Leitrim and Sligo audiences to three very special preview performances.

The first in The Glens Centre, Manorhamilton, on Friday, August 28 at 8:30pm. The second in The Hawkswell Theatre, Sligo, on Thursday September 3 at 8pm. The performance lasts 70 mins without an interval, is not suitable for children.