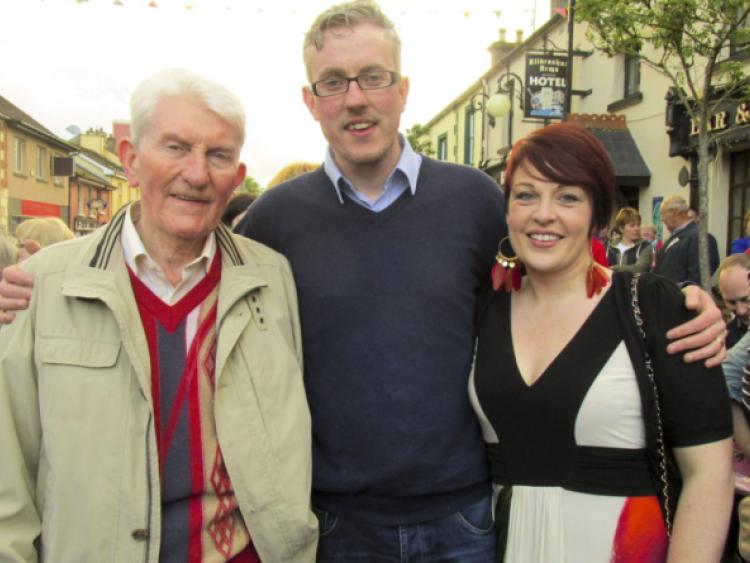 Their production of The Devil’s Céilí, by Philip Doherty and Kevin McGahern, won the perpetual trophy for best play and the best director award for first time director Ronan Ward. They also won the Abbey Theatre Award – meaning their production will be staged at the Peacock, as well as securing the award for best stage management!

Director Ronan Ward told the paper the 23 cast and backstage crew are still “buzzing” from their win. He said the award means so much to the entire production team, who were working on this since last August, but also for the Carrigallen and the local community.

Ronan said “it is not often we get an All Ireland in Leitrim.” The Corn Mill Theatre were also the only group competing in the All Ireland from Connaught. The cast and crew arrived home to Carrigallen last Sunday evening to bonfires and they paraded through Carrigallen to cheers from the crowd.

Adjudicator Russell Boyce described their high-octane, multimedia performance as a “tour de force of theatre.” Ronan said their performance received a standing ovation, which has only happened twice in 20 years at Athlone. This gave the crew an indication that their play was something special.

The play presents the psychedelic experiences of three men in a small Cavan town who are slipped LSD by the devil. Ronan said they really wanted to do a bigger show this year and they loved how different ‘The Devil’s Ceili’ is. He paid tribute to writers Philip Doherty & Kevin McGahern but also to the cast, stage and lighting crew. The Corn Mill were the first to bring visuals projections to the All Ireland Finals. The large cast come from Leitrim, Longford and Cavan and Ronan said they have high hopes for the future of drama locally.

Corn Mill were winners of the perpetual trophy in 2005 with Stolen Child by Yvonne Quinn and Bairbre Ni Chaoimh and in 1998 with Belfry by Billy Roche.

The Devil’s Ceili will play in the Corn Mill Theatre, Carrigallen this Thursday 15, Friday 16 & Saturday 17. The Jack L concert has been cancelled for May 16 and will be rescheduled. The Corn Mill Theatre then head to the Peacock Theatre in Dublin for May 22, 23 & 24.