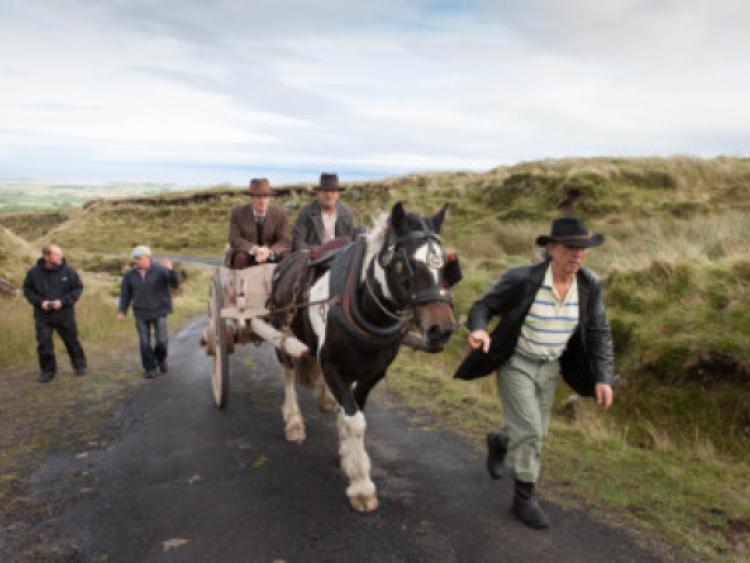 When Jimmy’s Hall was being premiered locally in Carrick Cineplex last Wednesday night, there was one man present who could take pride in not only the two-legged performances, but the four legged ones as well.

When Jimmy’s Hall was being premiered locally in Carrick Cineplex last Wednesday night, there was one man present who could take pride in not only the two-legged performances, but the four legged ones as well.

John Reynolds from Gortletteragh was the official wrangler for the Ken Loach directed movie set in 1920s and 1930s in rural Co Leitrim.

It was John’s job to look after his three horses and one donkey who appear in the movie at different times.

John is a well known character who is involved in horses and memorabilia from yesteryear. He explained that through Paul Gralton, a grandnephew of the title character, Jimmy Gralton, he met with John Nelligan who was involved in the production of the film.

The two Johns spent a full day looking at different pieces that would be suitable for the movie. This included a visit to Brian Kennedy at Glenview Museum, seeing the various machinery and props from that era.

Through John Reynolds, the contents of an old house were purchased in Streete, Co Westmeath, all to be used inthe film.

John himself was hired to be the movie’s wrangler, working with his own animals under the direction of Ken Loach.

The lead horse was Dixie who appears in the opening scene with Ben Bulben in the background. Dixie appears in some of the last scenes as well when Jimmy is on the run.

Another horse, The Major, brings them to the dance and the third horse, Upsadaisy is tied on the street in Sligo and Drumsna.

His donkey, Kabundie, which is owned by Jimmy’s mother in the movie, is in a lot of scenes. He is in the scene at the crossroads when they are coming back from the bog in the ass and cart.

John said the crossroads scene took a whole day to shoot and it took over 70 takes for it to be right. Shooting took 60 days and a good day in the movie industry would get you about two minutes of screen time.

“Ken Loach was such a perfectionist and so attuned to what people can do. Every morning he would see what you think will work. If it would not work, he’d say ‘we’ll do it some other way’,” said John.

Filming began in late July last year and continued until early September and every day on set involved the animals.

John said they trained all the actors how to handle the animals. This was done at Moorlands Equestrian Centre in Drumshanbo and he paid tribute to Niall McManus, without whom they would not have been able to do it at all as that was where the horses were stabled each night.

John admitted the money was good. “I’m not likely to get as well paid again,” he laughed.

He said John Nelligan was effusive in his praise of the area. He said the people were so cooperative and helpful. If they didn’t have something, they’d know where to get it. And of course the natural beauty of the place and the scenery.

John Reynolds too was impressed by the secluded countryside in that part of north Leitrim. “Some of that country up there in those hills is unreal. Nobody could fault the location,” he said.