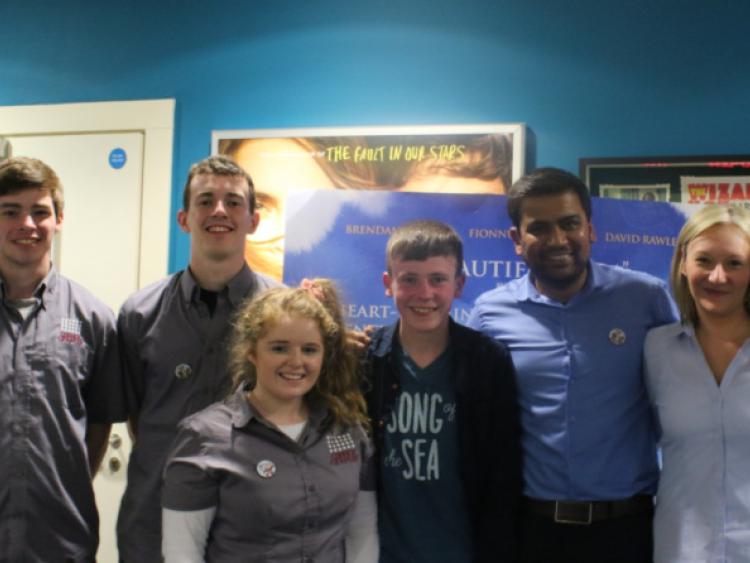 Film goers of all ages had a special treat last Friday night when they got the opportunity to put young star David Rawle under the spotlight.

Film goers of all ages had a special treat last Friday night when they got the opportunity to put young star David Rawle under the spotlight.

Carrick Cineplex hosted a special screening of the new Irish animated film ‘Song of the Sea’ where the young star of the film, Carrigallen’s David Rawle, was in attendance and participated in a questions and answers session with the audience after the screening.

David Rawle - who many will know as Martin Moone, the breakout star of Chris O’Dowd’s hit comedy ‘Moone Boy’ - voices the main character of ‘Song of the Sea’, Ben, a little boy who along with his selkie sister Saoirse travels through Ireland, into the fairy world and back home.

After the film screening, David participated in a questions and answers session where he described his involvement in the film.

He explained in detail the various processes involved when voicing a character and talked about his experiences working alongside his co-stars, describing it as an incredible opportunity, one that he’d love to do again.

He was asked many questions by the audience about his time attending the Academy Awards ceremony last February, describing his excitement at finding out on the day of the ceremony itself that the film’s producers had secured him a ticket and that he would be able to attend, much to his surprise and delight.

He discussed his plans for the future, stating that there are lots of different areas of the film industry that he’d be keen to explore.

He paid tribute to his friends and family for supporting and encouraging his acting career and also mentioned the rich acting and theatrical culture in Carrigallen that has played a big part in inspiring his interest in the performing arts.

After a very interesting and entertaining Q&A session this rising star left everyone present with little doubt that they would be hearing a lot more of David Rawle in the future.

Directed by Tomm Moore ‘Song of the Sea’ was created by Kilkenny’s Cartoon Saloon, founded by Paul Young, a Boyle native. It was nominated for an Oscar in the 2015 Academy Awards for Best Animated Feature, following in the footsteps of the highly successful history of ‘The Secret of Kells’ which was nominated in 2009.

The film is beautifully animated and features a superb soundtrack including Kíla and Lisa Hannigan, as well as a cast featuring the best of Irish talent including Brendan Gleeson, Fionnula Flanagan, Pat Shortt and more.