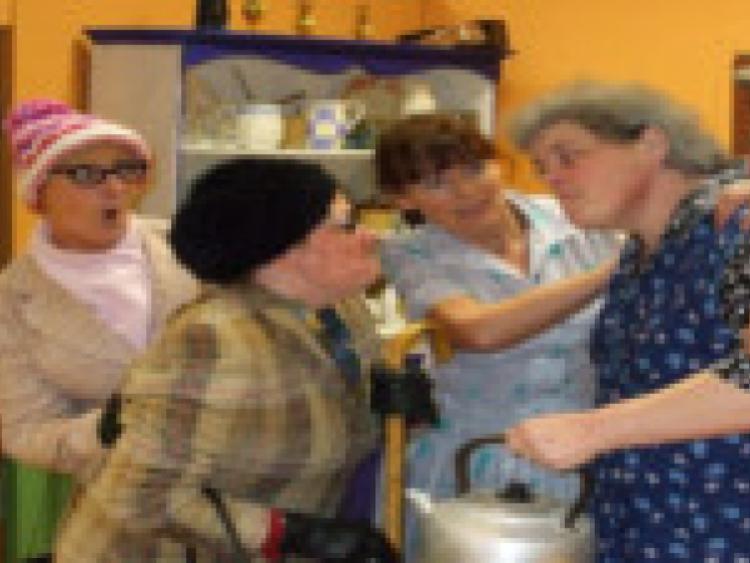 Two Leitrim women take to the stage next week in a new rip-roaring comedy set in rural Ireland.

Two Leitrim women take to the stage next week in a new rip-roaring comedy set in rural Ireland.

‘It’s the Real McCoy’ has taken the theatres by storm in a plot that is based on old Irish sayings.

The play is the brainchild of Midwest Radio broadcaster Tommy Marren who has a fascination with old Irish sayings and his play has caught the imagination of the entire country – so much so that it’s about to be unleashed on the stage of Dublin’s Olympia Theatre on June 27th, 28th and 29th.

Set over two days in the Spring of 1964 in the humble kitchen of Madge Molloy (played by Eileen Slevin) – a woman in her early 60s who has lived over four decades of her life wondering why her man she was married to for a mere five months disappeared without a trace.

The arrival of a new curate to the parish is about to reveal the circumstances behind Tom Molloy’s hasty exit and his wishes to return to explain to Madge the reasons why he left.

The play is filled with hilarious one-liners and old Irish sayings that has audiences in stitches all night long as Madge’s dislike for men is vividly portrayed through a series of plots and subplots.

With a gormless postman, a nervous husband, a timid curate and two pedigree gossips this play has it all but it’s the dialogue that is the most intriguing part of all.

Eileen said “When I tell people I’m from Leitrim they always seem to relate drama with our county so I regard that as a real compliment”.

Old Irish sayings like “What’s in the dog always comes out in the pup”, “A squeaky bicycle always gets the grease”, “The cock can crow but it’s the hen that delivers the goods”, are just a few of the dozens of old Irish sayings that have rekindled memories of a period in Irish life when country people articulated situations in a unique way.

Meanwhile Deirdre O’Meara plays the hilarious Nora O’Hora, the local gossip and her appearance at the most inappropriate moments causes mayhem throughout the show.

Deirdre said, “It would be great to see Leitrim out in force. I promise them that they will leave the Olympia proud of Leitrim. We will certainly be flying the flag.” The production has over 300 guaranteed laughs, a storyline that will keep audiences guessing right to the final scene and the promise of a two-hour play that will take audiences on a nostalgic trip like never before. “It’s The Real McCoy” will be staged at the Olympia Theatre, Dublin on Thursday June 27th to Saturday June 29th nightly at 8 pm. Tickets on sale at www.ticketmaster.ie For more info see www.crokeyplays.com