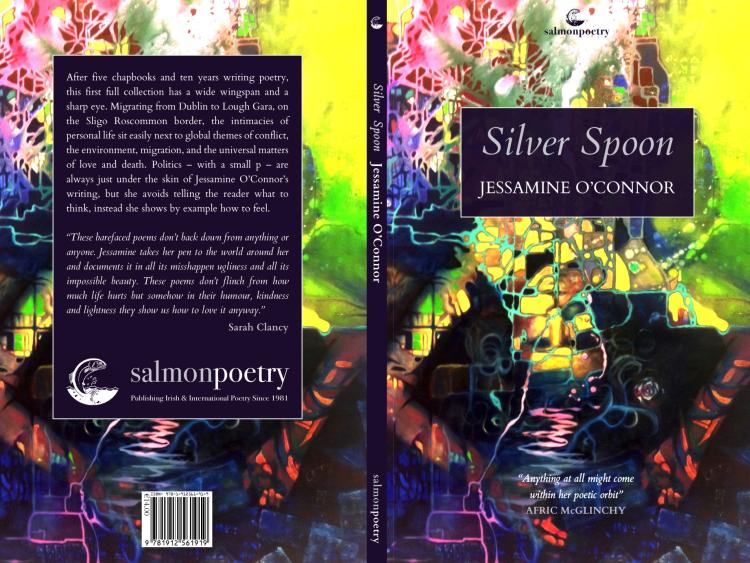 The book also features original paintings by artist Helen Chantrell, including the stunning cover. The work includes poems selected from the last ten years of writing, and crosses terrain of all sorts, from love and family to death and violence – and beyond.

As poet and editor Neil Young writes of this collection in his preface:

“She’s a writer of insatiable observation, whose watchfulness of norms of existence – in the living home, the street, the doorways, the fields, her native heath, up a chimney, in a dog’s glance – often lays bare its abnormality, or urges us on to revisualise the familiar… Innocence and menace interchange; fear and wonder collide. All this expressed, as is her knack, with unmistakable lyricism and empathy.”

“After five chapbooks and ten years writing poetry, this first full collection has a wide wingspan and a sharp eye. Migrating from Dublin to Lough Gara, on the Sligo Roscommon border, the intimacies of personal life sit easily next to global themes of conflict, the environment, migration, and the universal matters of love and death. Politics – with a small p – are always just under the skin of Jessamine O’Connor’s writing, but she avoids telling the reader what to think, instead she shows by example how to feel.”

Jessamine moved from Dublin to Monasteraden in 1999, and has been involved with various local groups, including The Hermit Collective and Ballaghaderreen Failte Isteach, and considers herself a very settled blow-in.

Currently, Jessamine is the  'Mediator in residence' at The Dock, Carrick-on-Shannon and also the Ireland editor for the new Scottish press 'Drunk Muse Publications.'

Jessamine has won multiple awards, including the  iYeats Award and the Francis Ledwidge Award and has been shortlisted for many others, including Boyle Arts Festival Poetry  competition,Westport Literary Festival poetry competition and the Hennessy Literary Award.

The book is available now from Salmonpoetry.com and soon in good bookshops – and your local library.