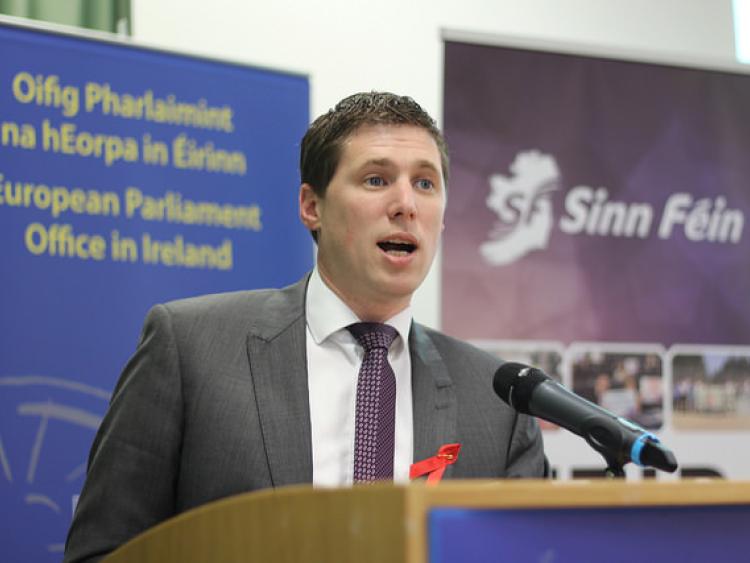 Sinn Féin MEP Matt Carthy has told the European Parliament that the British Government had not presented a single realistic proposal on the Irish border in Bexit negotiations.

He said the current British position, dictated by the DUP, is political lunacy, that would harm unionist workers, students, businesses and farmers as much as their republican counterparts.

Carthy was speaking in the Parliament today, Tuesday, during a key debate on a resolution on the future relations between the EU and Britain after Brexit.  The final agreement will need to be approved by both the European Parliament and EU Council.

During his remarks, the Sinn Féin representative also told EU leaders that their ongoing drive for further militarisation of Europe runs contrary to the wishes on European citizens.

Matt Carthy told parliament: “The strength of this resolution on Ireland is to be welcomed. Every month since the Brexit referendum there has been growing support for the Sinn Féin proposal that the North of Ireland requires Special Status to prevent a hardening of the border, protect the Good Friday Agreement, and to defend citizens’ rights. Membership of the Single Market and Customs Union for all of Ireland is essential.

“The British Government has not presented a single realistic proposal on the Irish border.  Their position, dictated by the DUP, is political lunacy that would harm Unionist workers, students, businesses and farmers as much as their Republican counterparts.

“The backstop - while not perfect – provides some much needed certainty. The British government signed up to this in December. For once, it’s time for them to honour their word.

“Finally, the Irish people have confirmed time and again that they want to be part of the EU. But, like citizens across Europe, they want a social, progressive, democratic EU.  The ongoing drive for the further militarisation of Europe, including PESCO, is regressive and undermines the message of solidarity and peace that should be central to this parliament’s response to Brexit."