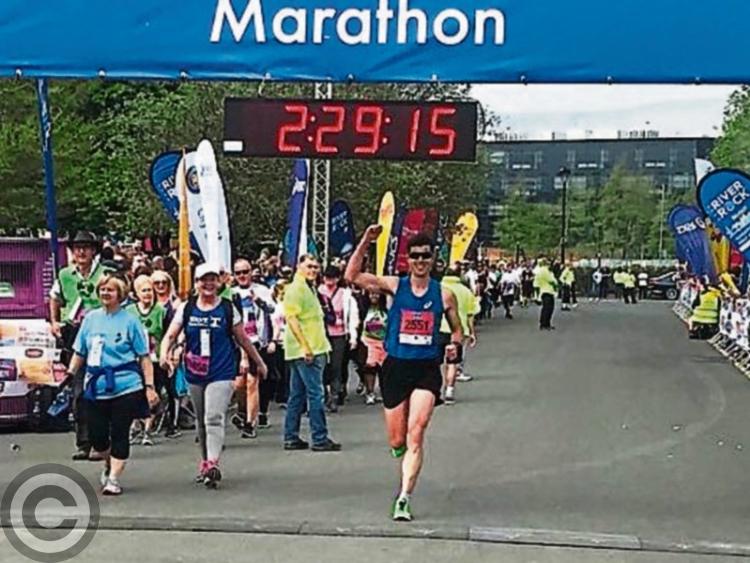 A delighted Colin Griffin raises his arm as he crosses the line in fifth place in Monday's Belfast City Marathon. Photo by Ryan Maxwell

Better known to the Leitrim sporting public as an Olympic race walker, Colin Griffin broke new ground on Monday when he finished fifth in the Belfast Marathon.

The Ballinamore AC athlete also set a superb new personal best for the testing 26.2 mile distance and broke the 2 hours 30 minute barrier with a superb clocking of 2.29.15.

More remarkable was the fact that Colin ran a negative split on the Bank Holiday Monday in that he ran the second half faster than the first, going through the halfway point in 75.15 meaning he covered the second half in 74 minutes exactly.

The time took over four minutes off Colin's previous best time and saw him average 5.41 per mile for the entire distance. The time was good enough for Colin to finish fifth behind winner was Eric Koech of Kenya who won 2:18.19.

Two other Kenyans Dan Tanui and holder and three times winner Joel Kositany took the next two places with Meath's Eoin Callaghan of Star of the Sea fourth in 2:27.43.

The Women's winner was also a Kenyan Caroline Jepchirchir in 2:41.17 with holder Irish International Laura Graham of Kilkeel second in 2:43.34