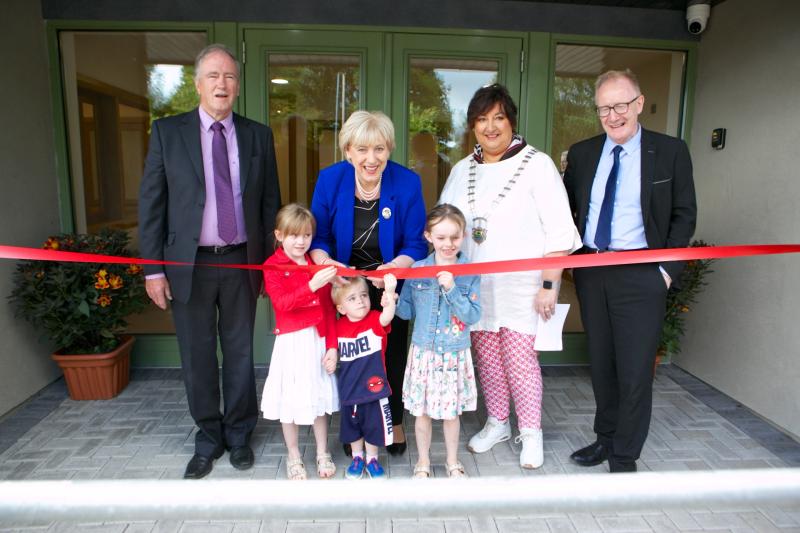 For the community volunteers behind the recently renovated Ballinamore Community Hall last week marked a major milestone - the official opening of The Island Theatre.
The landmark project received over €200,000 in funding in total through the 2018 Town and Village Renewal Scheme and LEADER.
The state-of-the-art Island Theatre performance venue seats just over 240 people and offers a multi purpose space
Cathaoirleach of Leitrim County Council, Cllr Ita Reynolds Flynn, reminisced about her time socialising in the hall during her youth, recalling the Roller Discos and dances held at the venue, joking “this is where I had my first kiss. I am not saying who it was.”
She paid tribute to the members of Ballinamore Community Hall CLG “who gave their time so willingly to ensure the delivery of this extremely worthwhile project.”
She also highlighted the assistance of Leitrim County Council, the Leitrim Local Community Development Committee, Leitrim Development Company and Minister Heather Humphreys and her Department in supporting the project.
Tom Burns, Ballinamore Community Hall CLG described the opening as a “great occasion” for Ballinamore and the local community.
He thanked all the committee members who had driven the project forward through “hundreds of meetings” over the last six years and also thanked the Ballinamore Parish Council and Ballinamore Development Company for all their help.
Tributes were also paid to the contractor, Crossdoney Construction.
The landmark project received funding of more than €200,000 in funding through the 2018 Town and Village Renewal Scheme and LEADER as well as other smaller allocations but Mr Burns noted “there is still a substantial amount of money to be raised by the community.”
He noted the donations made by families and businesses in the community and observed “the individuals who come to use the facilities here, they are the people who will ultimately pay the bills”.
Officially opening the Island Theatre, Minister Humphreys said: “Developments such as this are so vital to the community. They increase the social and cultural capital of our towns, and help to boost economic activity in the area - making our rural towns more attractive places to live and work.”
She paid tribute to everyone involved in the project, in particular the work of the voluntary group, the Ballinamore Community Hall CLG, who ensured the successful delivery of the project.
Leitrim Development Company's Brian Smyth, also recalled attending events as a teenager at the hall and said that he knew the amount of hard work the committee had done.
“The parish put in a huge effort here to establish the title of the property and the committee have worked tirelessly down through the years,” he noted.
“The final investment in this project is somewhere in the region of €800,000,” he said noting that the value of the voluntary work carried out by the community would be the region of €200,000, “if you put a figure on it.”
Highlighting the “enormous work that has been undertaken by an undaunted and fearless committee”, he also thanked Tom Burns for the leadership he has provided and wished the group every success in the future.
Finalising proceedings, Minister Heather Humphreys added her congratulations to those involved in the project observing “I don't know where we'd be in this country without all the volunteers.”
“I'm very much into the bottom up approach. People in the community know what the needs in your area are and then you come to us for funding. That's what our Rural Future is all about.
“I am delighted to see the investment of my department in rural areas, making places like Ballinamore better places to live and work in.”
She encouraged communities to get involved locally and to be brave with their projects.
“I really want to say thank you to rural communities like Ballinamore,” she said. “And I am absolutely delighted to declare Island Theatre officially open.”