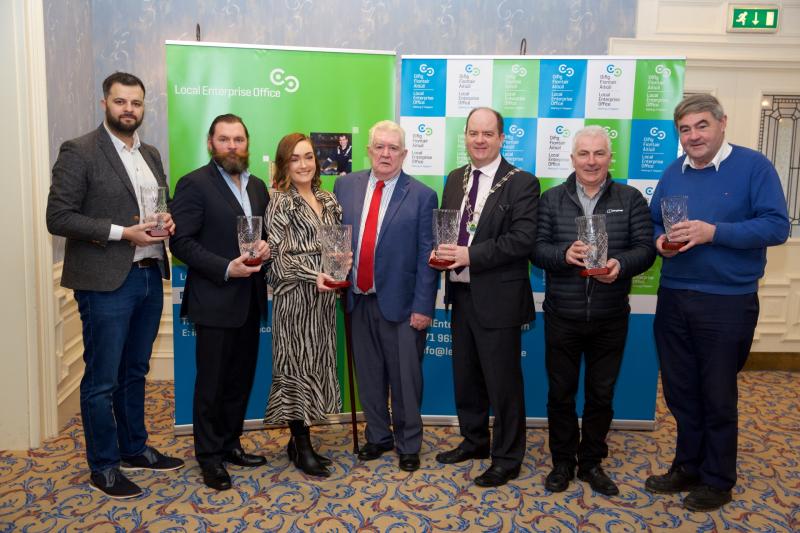 Winners and finalists at the County Enterprise awards

Food production business from Dromod is this year’s winner of the Co Leitrim Enterprise Award for 2020, Local Enterprise Office Leitrim has announced.
Dromod Boxty took the top prize of €2,000 and will now represent Local Enterprise Office Leitrim at the 22nd National Enterprise Awards in the Mansion House in Dublin next May.
Dromod Boxty have been producing high quality artisan products for 30 years and manufacture a range of boxty, potato bread and pancake products, from their base in Dromod.
Other winners at the Co Leitrim Enterprise Awards held at The Landmark Hotel, Carrick-on-Shannon included;
- The Food Hub which has contributed hugely to food enterprise development locally and nationally and is recognised as a Ireland’s leading food incubator won second prize;
- Blakes Always Organic who manufacture a range of premium organic food products including organic milk kefir and roast organic coffee from their premises in Drumshanbo won third prize.
Dromod Boxty will now be competing against 30 other finalists from every local authority area for a share of the €40,000 prize fund as national judging gets underway in April. Categories this year include ‘Best Export Business,’ ‘Future Focus’ and ‘Innovation,’ in addition to eight regional awards.
The Co Leitrim Enterprise Awards took place as part of a very successful Local Enterprise Week programme of events. There were over 300 events taking place across the country, run by the 31 Local Enterprise Offices from March 2- 6.
Speaking during Local Enterprise Week, Joe Lowe, Head of Enterprise with Local Enterprise Office Leitrim said: “For the last two decades, the National Enterprise Awards have celebrated homegrown success stories from every corner of Ireland, putting their achievements into the national spotlight. And at the 2020 National Enterprise Awards, we are delighted to be represented by Dromod Boxty, yet another homegrown success story and we wish them continued success with their future plans.”
Four other local businesses were also shortlisted as Finalists included;
- 12 Quail Farm Soap Studio, Fenagh who manufacture a range of handmade soap, using a range of ingredients including donkeys' milk.
- Bandit Films T/A Aliceway Ltd which is the development and production vehicle for the films and tv programmes of Irish film maker Johnny Gogan.
- Drumshanbo Enterprise Centre was set up in 1990 as a community workspace with units for rent and provide units, office space and training room hire.
- Zenoz is a high end product development company based in Carrick-on -Shannon.
Among the special guests at the ceremony were Lar Power, Chief Executive of Leitrim County Council, Cathaoirleach Enda Mc Gloin, elected representatives and Joan Mullen from Enterprise Ireland.
Other high-profile events that took place during the week included Student Enterprise County Final, Women in Business Networking Event and Search Engine Optimisation clinic.
Local Enterprise Week is organised every year by the Local Enterprise Offices and supported by Enterprise Ireland, local authorities and the Government of Ireland.