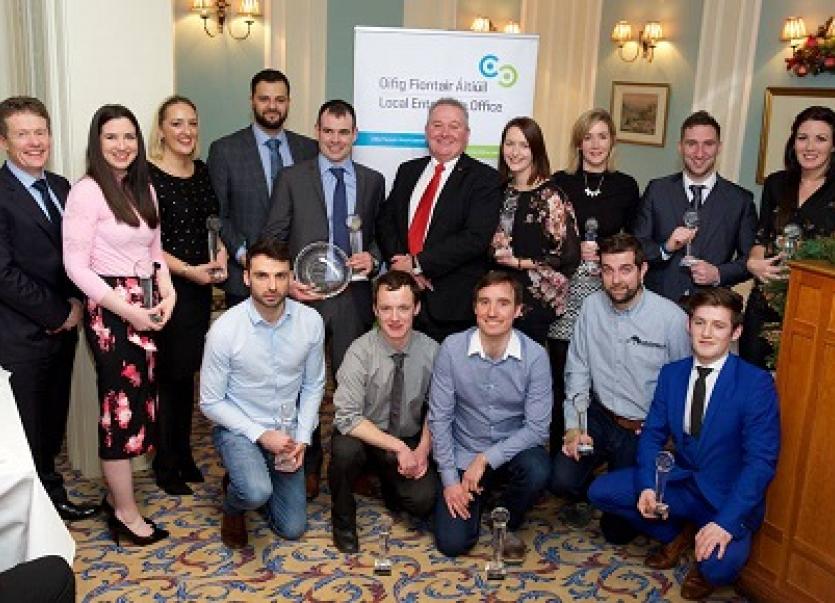 The finalists and representatives from the County Entreprise Office.

Leitrim’s best young entrepreneurs were announced this week at the County Final of Ireland’s Best Young Entrepreneur (IBYE) competition.
Run by the Local Enterprise Offices, IBYE is supported by the Department of Business, Enterprise and Innovation and Enterprise Ireland. Now in its 4th year, this year attracted almost 1,500 applications nationwide.
Joe Lowe, Head of Enterprise in Leitrim explained: “The search to find Ireland’s best young entrepreneur back in August and we were delighted with the calibre of entries. After a very successful Enterprise Day, Bootcamp and County Final, I’m pleased to confirm that the future of enterprise and job creation in Leitrim is bright.”
There was joy for Richard Wilson, aged 30 of Wilson Machinery in Ballinamore as they were named winner of the Best Established Business award. They were joined by Selina Shanley, aged 33 of Leitrim Physiotherapy in Carrick-on-Shannon, who took the runner up title in this category.
The Best Start Up category was a particularly hard-fought contest. Oz Ibrahmi, aged 30 of Zenoz Ltd in Carrick-on-Shannon was named winner while Grace Roche, aged 31, of Pretty Bird Limited in Leitrim Village was named runner-up.
Many innovative new business concepts emerged in the Best Business Idea category. The winner was Raymond McBride, aged 31 from Dromahair while Sean Hayden, aged 30 from Carrick on Shannon scooped the runner up title.
Richard Wilson of Wilson Machinery was also named the Overall Winner of IBYE for Leitrim.
The adjudicators in this year’s competition were Carole Brennan of Enterprise Ireland, Declan McNamara of Moran McNamara Accountants and Joe Lowe, Head of Enterprise in Leitrim. The awards ceremony was attended by other special guests including Joseph Gilhooly, Acting Chief Executive of Leitrim County Council, Councillor Finola Armstrong Maguire, Chairperson of Leitrim County Council and other invited guests.
IBYE Co-ordinator for Leitrim, Joe Lowe concluded “Each of the winners and runners-up will share in an investment fund of up to €50,000 from the Local Enterprise Office to help grow and develop their business. The 3 category winners go forward to the Regional Finals in Donegal in January. The team in Local Enterprise Office in Leitrim will be providing intensive supports between now and then to prepare them for the regionals and hopefully Leitrim will have a representative at the IBYE National Finals in March.”
Stay up to date with the competition by following on Facebook, Twitter, Google+, LinkedIn and YouTube. Find out more about supports available to entrepreneurs of all ages by visiting www.localenterprise.ie.