Plaque unveiled in Rooskey to 'an extraordinary rebel' 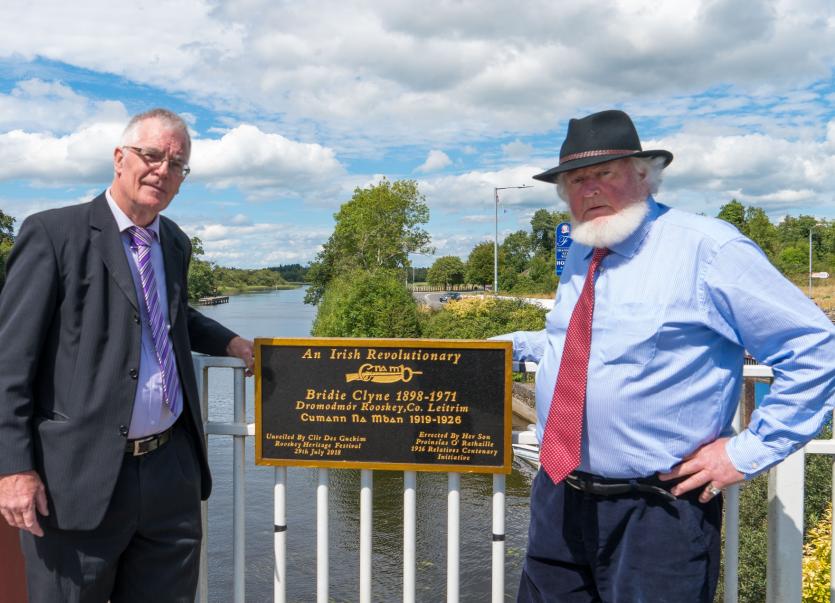 Pictured are Cllr. Des Guckian, left, and Bridie Clyne's son, Proinsias O'Rathaille. His grandfather was The O'Rahilly, the only leader of the 1916 Rising to die in action.

A plaque honouring local woman and Cumann Na mBan member, Bridie Clyne, was unveiled at a ceremony on Rooskey bridge by Cllr. Des Guckian on Sunday.
Bridie Clyne has been described as an “extraordindary rebel” who founght injustice and oppression.
Unveiling the plaque Cllr Guckian stated “Some of you know me as your local Independent Co Councillor and an historian who has published eleven books. In the presence of Bridie’s son, Proinsias, I wish to welcome you all on this historic occasion. Prionsias told me he had a dream that his mother’s memory would be honoured in Rooskey. Today, that dream has come true.
“Bridie Clyne was born in 1898 and was reared beside Killianiker Bridge, half a mile upstream from this bridge. This plaque in her honour is within sight of the place where she was reared. The history I’ve written shows that her ancestors were very nationalistic and patriotic. In 1998, I wrote a history of 1798 called 'Leitrim & Longford in 1798'. In it, I’ve recorded that when the Irish rebels were fleeing westwards after the Battle of Ballinamuck some were saved by John Clyne and that he ferried them to his island on the Shannon and then across to Co Roscommon. That was a very brave thing to have done.
“In the Land War of 1870 to 1890, another John of the same family was on the Annaduff Land League Committee.
“My ancestors were on that same Committee and together they fought to release the greedy grip of the local landlords. It is little wonder then that Bridie Clyne went on to be “an extraordinary rebel” fighting injustice and oppression wherever she found it.
“In 1940, Bridie married Dr Niall O Rathaille, son of Michael “The O Rathaille” , the only one of the leaders in 1916 who was killed in action. All of the leaders in 1916 were admirable and unselfish. Personally, I regard The O Rathaille and Leitrim’s own Seán Mac Diarmada as the purest spirits of all.
“Bridie Clyne was a brave member of Cumann na mBan in Dublin. She took the Republican side in the Civil War and, driving an ambulance, she went to the relief of the rebels who were besieged in The Four Courts. The story of Bridie’s life is a cross-section of Irish history and she knew all the leading lights in the fight for freedom and during the foundation of our Irish state. Later, she established her own successful advertising agency and had bodies like Bord na Móna and The Hospitals Sweepstake as her advertisers. She died in 1971. May the green sod of Ireland rest lightly upon her.
“Bridie Clyne richly deserves to be remembered by all. Because of her own heroic deeds and my own ancestors’ friendship with her ancestors, it is a huge honour for me to be here to unveil this plaque.
“At a time when appropriate nationalism is being frowned upon and local rural issues are being swept to one side, we must remember, and learn from, the great heroes and heroines of our past history and salute their unselfish service to the cause of Ireland,” he concluded.