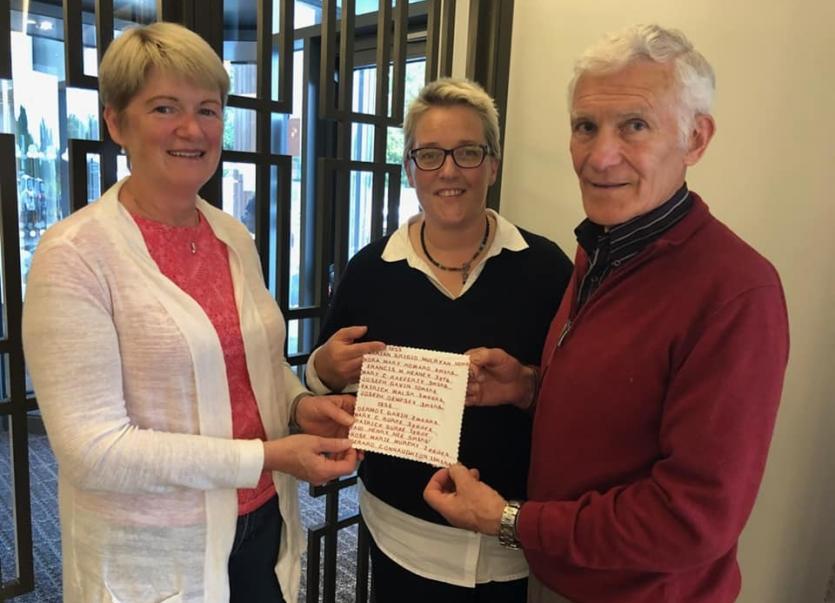 Deirdre Lynam from Drumcong with Kathleen and Peter Mulryan from the Tuam Home Survivor's Network. Deirdre presented them with the 60 pieces of fabric, with the names of the babies who died in Tuam

Drumcong woman Deirdre Lynam recently completed a project which pays tribute to the 796 babies who are known to have died at the Tuam Mother and Baby Home.

Using a sewing machine, curtain lining and a spool of red wool, Deirdre created a memorial to the babies who died there between 1925 and 1961.

Historian Catherine Corless spent years researching the death records of the babies who passed away at the home with her discoveries coming to light last year which revealed the babies were not given an official burial place.

Deirdre said her motivation for completing her project came from, “An overwhelming need to do something.”

Moved to pay tribute to the babies, Deirdre embroidered the names and ages of the 796 babies in red thread on white pieces of fabric.

Last week Deirdre met with Peter Mulryan and his wife Kathleen from the Tuam Home Survivor's Network to whom she presented the pieces of fabric.

Commenting on her experience of meeting Peter and Kathleen, Deirdre said, “I had the privilege of meeting with chairperson of the Tuam Home Survivors Network Peter Mulryan and his wife Kathleen and their secretary Breeda Murphy.”

Deirdre said she was particularly struck by Peter's story as he is a survivor of the Tuam home.

“Peter's story is especially poignant as he is a survivor of the home, fostered to a violent man and made to work the farm from the age of four years old.

“His mother never left incarceration. She instead moved to the laundries until her death. They are such amazing people.”

Talking about what motivated and inspired her to embroider the names and ages of the babies known to have died in the Tuam home, Deirdre said, “The horror of a septic tank unveiled by Catherine Corless and the loss of 796 children in the Mother and Baby home between 1925-1960 inspired me to commit their names and ages to fabric.

“Sixty squares later I handed them over to the committee for display at future events.

“I had such sadness stitching each name and I am delighted to be finished and they now have purpose.”