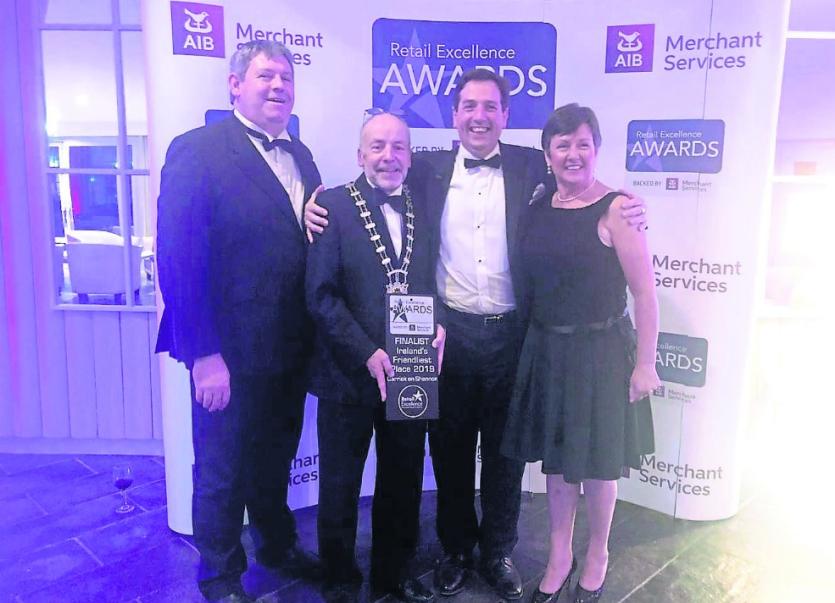 Retail Excellence, the largest Retail representative body in Ireland, has announced the winners of their annual Awards held in the Great Southern Hotel, Killarney recently.

The Awards, which are backed by AIB Merchant Services, were presented by energetic TV personality Hector Ó hEochagáin and attended by more than 500 Irish retail industry executives.

Carrick-on-Shannon in Co. Leitrim came runner in the category Ireland’s Friendliest Place. The category winner was Slane, in Co. Meath.

Cathaoirleach of Leitrim County Council Sean McGowan said “This is an outstanding achievement for Carrick-on-Shannon. The award is a measure of the helpfulness and first class service that the business community in Carrick-on-Shannon provide.

“Thank you to each and every one of the businesses in the town for their on-going work and commitment to make Carrick-on-Shannon the friendly and vibrant place that it is. Continued success to everyone involved.”

Group CEO of Retail Excellence David Fitzsimons said “We are delighted to recognize and award the very best in Irish retail all of whom have shown an unquestionable commitment to meeting and exceeding customer expectations as well as innovation in store and in-service delivery.

“We are particularly pleased that across all of our categories of awards Irish retailers, both big and small, urban and rural competed to deliver that exceptional standard of service to customers regardless of their size.’

“We look forward to working with the finalists, entrants and members into the future to assist in their endeavours and continue driving standards in Irish retail.”

“Congratulations to all the winners. These retailers represent the best in retail industry in Ireland. AIB Merchant Services are proud to partner with Retail Excellence Ireland on such a prestigious event,” said Robert Doherty, Director of Product at AIBMS.

Carrick-on-Shannon ambulance base restored in Leitrim