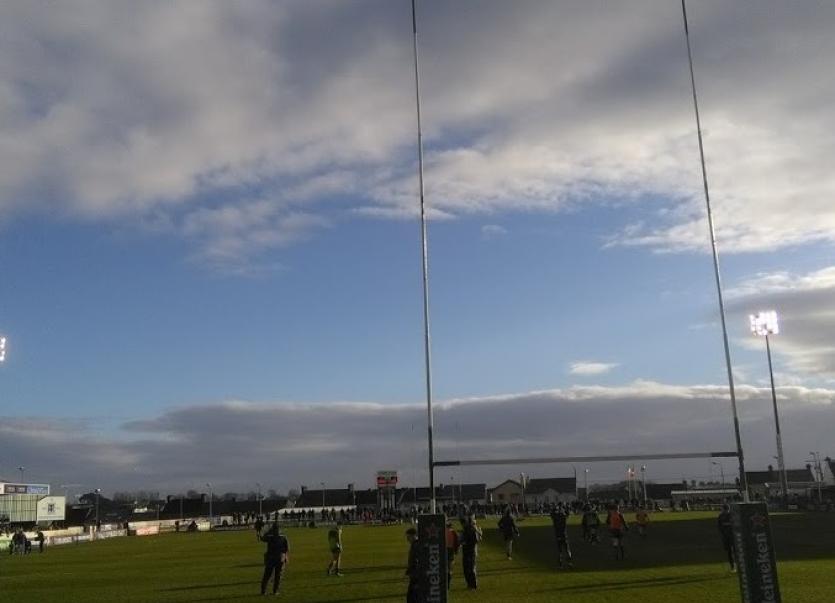 Carrick RFC’s senior team were granted their first win of the season beating a fiery and well organised Claremorris outfit 19-6 in a ferociously contested match played in blustery, muddy conditions in Dunmore.

In what turned out to be a fiercely competitive and thrilling game, Peter Lavin defies multiple Claremorris tackles to score a crucial try within the first half to swing the game in Carrick’s favour and ultimately gives the Carrick side the winning edge.

In the opening few minutes, the Mayo men had been well on top, dominating possession and kept Carrick firmly in their 22, but failed to capitalise. After many intensely contested rucks, the Carrick men managed to win possession and force Claremorris down to their 22. The never-ending pressure from the Carrick forwards, particularly in Sean Hynes and Paddy McKeon, caused Claremorris to forfeit a penalty in their half.

A cool and well placed kick from Michael Domican produced the first score of the game and gifted the Carrick team the lead.

Claremorris responded promptly with well-timed runs, causing the Carrick men to infringe offside at the break down and give the Mayo side three easy points.

Carrick put more emphasis in direct, straight-running play and used their powerful forwards in Ian Cullen, Darrach Patterson and Colm McWeeney to tire Claremorris. An impressively strong run by Peter Lavin crashed over the line scoring a try. Keith O’Neill slots over the conversion giving the Carrick men a 10-3 lead.

After the restart, Claremorris were first to attack and put pressure on Carrick’s wings, which ultimately caused a scoreable penalty bringing the score to 10-6.

However, Keith O’Neill put more daylight between the sides when he slotted over another penalty. A few minutes later, an untimed kick by a Claremorris player to Carrick’s Dermot Foley caused him to leave the game with a head injury.

Good link up play by newcomers Robbie Davis and John Healy saw Healy make two impressive runs through the centre of the pitch. The Claremorris players illegally brought Healy down, which provided Keith O’Neill with another thee points.

After that, Carrick found an extra gear as the contest headed towards the climax with Captain Darrach Patterson and stalwart Keith Crossan taking control of the ball and running hard at the opposition, which made victory more secure when yet another penalty was succeeded. Keith O’Neill scored the penalty resulting in a 19-6 victory to Carrick.

Carrick RFC team would appreciate people to come out and support them in what will be a great game of completive rugby.