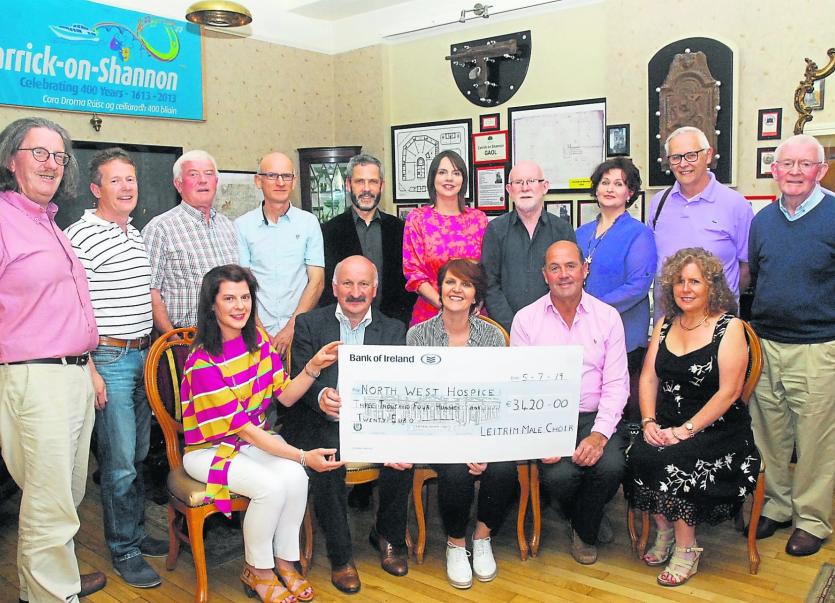 On Wednesday, June 5 during Carrick Carnival week The Leitrim Male Choir held a concert in the Bush Hotel, all proceeds of which went to the North West Hospice.

Raising much needed funds for the NW Hospice was very close to all our hearts, and something we wanted to do for quite some time now.

This was very fitting as we dedicated this concert to the Memory of three of our past members Joe Flynn, Luke Early, and Brian Mulvey, three members we still miss ,and will never forget.

We were honoured to have so many family members of all three with us on the night.

Conducted by Siobhan Talbot and accompanied by Mick Blake the Male Choir performed many numbers such as Chorus of the Hebrew Slaves, Heartlands, Parting Glass, Remember me, and many more to a very appreciative audience.

We were joined by Flautists Rhona Trench and Edel Rowley, and together with Alla Crosbie they also performed some instrumental numbers.

Another highlight of the evening was when we were joined on stage by Eleanor Shanley, who gave fantastic performances ,both with the Choir, ,and also in some solo performances with John McCartin.

It was indeed very special for everyone of us to be joined by Leitrim's very own Eleanor Shanley.

There was standing room only in the Bush Hotel as the crowd enjoyed every moment of each performance.

We would like to Thank everyone who came and supported us on the night.

We would also like to thank the Bush Hotel for all their help in making the night so special.

Thanks to Brendan Dee, Carrick Carnival, and to Alan Dunne, Sound and Light, special mention to John McLoughlin who looked after everything on the door that night.

Special thanks to all the staff of the Leitrim Observer for their help, and to Charlie McGettigan Shannonside Radio.