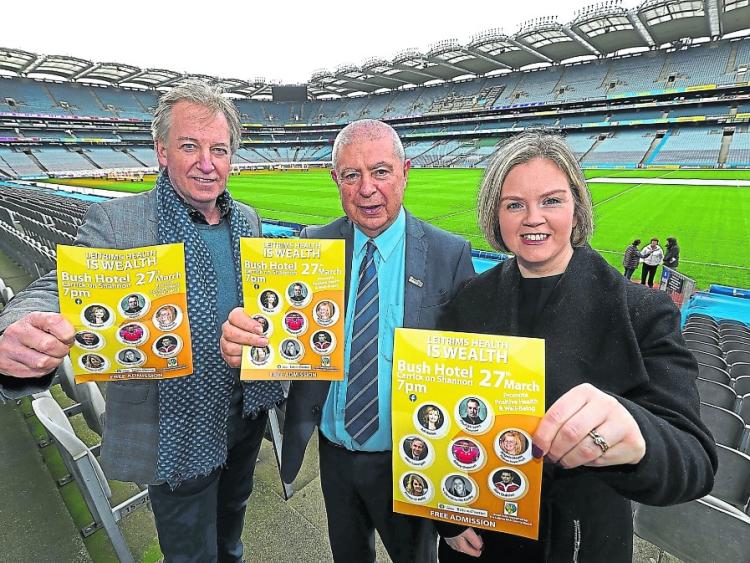 The 2020 Leitrim's Health is Wealth seminar will not only be the final one it will also mark the retirement of organiser, Hubert McHugh who is pictured with co-organiser Valerie Cogan & Paul Williams

It has become one of the most successful mental health and volunteering events in the country but February 2020 will mark a major milestone both for the seminar and for organisers, Hubert McHugh and Valerie Cogan.

On February 12, 2020, the fourth and final Leitrim's Health Is Wealth conference will be held. This date also marks a very special occasion for former Leitrim Guardian Person of the Year, Hubert McHugh, who will also marking his retirement as a community psychiatric nurse after 45 years of services to the south Leitrim community.

Co-organiser, Valerie Cogan, will also be marking her transfer from her current position to a new Sligo-based role.
Speaking to the Leitrim Observer about the upcoming event, Hubert and Valerie said that they were already in talks with a number of speakers and hoped to finalise the lineup shortly.

“This will be bittersweet,” admitted Hubert. “It is not only the last Leitrim's Health Is Wealth, I am also retiring after 45 years working in this community and I feel very honoured and privileged to have worked with wonderful colleagues like Valerie and to have also met wonderful people and their families through my work.

“We are going to use the upcoming Leitrim's Health Is Wealth event next February as an opportunity to give back to a charity that we both feel very strongly about,” he added, “the North West Hospice”.

Both Valerie and Hubert were named as Hospice Heroes last year and are asking that anyone who wishes to make a contribution on Hubert's retirement, to do so by making a donation to the North West Hospice, so they can continue to provide vital services to the community.

A raffle will also be held on February 12 with all proceeds going to the North West Hospice.

“Hubert is such a well known and highly regarded person in the community. He was honoured as a Leitrim Guardian Person of the Year, but he has also spent 45 years serving the local community in his job as a community psychiatric nurse. He has touched a lot of lives and he has always gone above and beyond for the people he has worked with,” points out Valerie.

“This is going to be very special not least of all because this night will also mark his retirement.”

Well known investigative journalist, Paul Williams, has already signed up as MC of the 2020 event and Valerie and Hubert will be releasing further details of Leitrim's Health Is Wealth in the coming weeks.