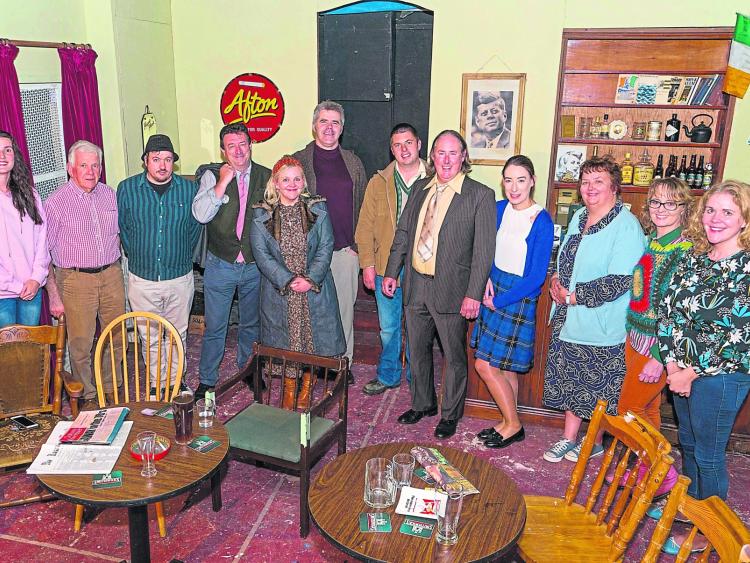 Conversations of a Homecoming: The cast of the production directed by Sinead Quinn which will play in The Dock in February

Just before this year is out it is important to mark the very important 75th anniversary of The Breffni Players.
Leitrim has a fine tradition of drama and so it is acknowledged that keeping the show on the road for 75 years, with no year missed, is quite the feat.
The Breffni Players Dramatic Society was founded in 1943 and was the first group in the district formed solely for the purpose of producing plays and fostering dramatic art.
They produced 'Nothing in his Life' a stirring drama of the Black and Tan days by Louis J. Walsh in Labour Hall, Carrick-on-Shannon on April 19-20 in 1944.
A plaque was recently unveiled at what was the old Labour Hall on the Dublin Road. The President at the time was Rev B Keville.
Two years later they organised a local drama festival and Mohill Players, Strokestown Drama Society and Elphin Dramatic Society attended.
Angus Dunne, who has been involved with The Breffs for the past 42 years said that at the time Carrick-on-Shannon was popular for apprentices and had a large number of “outsiders” working in the town, young energetic people who were looking for a social outlet.
Angus said he was “dragged in” and started in set design before getting “hooked” on acting under the direction of Paddy Dillon.
Angus said it is difficult to quantify how many people are involved in the Breffni Players, “just because you are not part of one production does not mean you will not be in the next one.”
He said they never have a problem with getting actors, but some backstage jobs could do with more help. “The show would not go on without our backstage crew.”
One man who has given his all to the backstage production is Jim Gorman who has been lighting the stage for the Breffni Players for 60 years - what an achievement!
The Breffni Players were successful for years on the drama circuit with one and three act plays for decades. They travelled the country and received numerous accolades for their productions.
Angus explains they stepped away from the circuit some years ago as many of their cast and crew couldn't travel due to work.
The Breffs were associated with The Shambles, now the Market Yard in Carrick for years, but in 1998 purchased and opened their own premises on the Leitrim Road with the help of John McDwyer. This space allows the group to build sets, store equipment and rehearse at their ease.
Angus said the Breffni Players are always open to new members and love get new people involved. It is an adult organisation so most members are over 18 years, although every now and again they take in younger members with a chaperone.
Angus said the group provide a great social outlet, but did add it is a big commitment not only for the individual but for their family. “We start out meeting once a week, but as the production gets closer we could be meeting 4-5 times a week.”
Angus Dunne and Sinead Quinn are the two directors at the moment and he explains their styles are very different.
“When I chose a play, I cast it in my mind, if I don't think I have the main characters, I don't proceed. Sinead picks a play and then auditions the members. There is no right way, we both have different styles.”
The Breffni Players are back again on February 25 - 29 in The Dock with Juno and The Peacock by Sean O'Casey, directed by Angus Dunne.
Sinead Quinn is directing Present Laughter which will take to the stage in May 2020.
And from there onwards to the 100th anniversary!