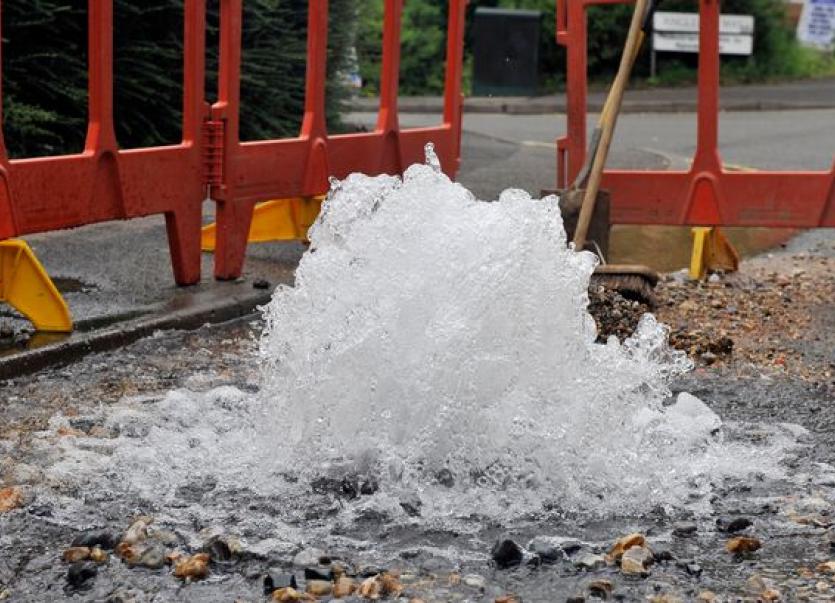 Councillors and council staff have expressed their frustration at ongoing problems with water supply in South Leitrim.
At Monday's Ballinamore Municipal District meeting, assistant senior engineer, Francis Gaffney, told members that the council is operating under a Service Level Agreement with Irish Water, “we have no hand, act or part in the preparation of a budget with them”.
Mr Gaffney said that there is “no money” available from Irish Water this year to carry out much needed upgrades of infrastructure in South Leitrim.
“We had a commitment from Irish Water to do replacement works on pipes previously but none of this is going ahead now this year,” he said.
This year Irish Water has committed to upgrade works in St George's Terrace, Carrick-on-Shannon.
However Mr Gaffney said water mains installed in the South Leitrim area in the 1970s have reached the end of their life and are failing, causing significant disruptions to supply.
Places such as Keshcarrigan, Fenagh and Ballinamore are all being impacted by bursts, he noted.
He estimated that 50-60km of pipes needed to be urgently replaced adding they are “failing on us every other week”.
He said that despite appeals for funding from Irish Water he had been informed “we are getting no more money”.
“This is a very big issue...these pipes are all over the place and they are coming to the end of their life. We are in the position where we have to keep repairing them (when they burst) and that's all we can do”.
Mr Gaffney said this problem is not unique to Leitrim adding that similar issues are being reported in counties across the country.
While he acknowledged that major infrastructural works have been carried out in other areas of Leitrim since Irish Water came into existence, he said that major investment is needed going forward in South Leitrim.
Critical to this is the replacement of failing infrastructure and also the extension of Carrick-
on-Shannon's water treatment plant, which is already operating near full capacity “with no scope for provision to cater for further development in the region over the next 10 to 15 years”.
“There is very little (investment) to report in 2020 in Leitrim nor any indication of any investment planned in 2021,” said Mr Gaffney.
He said Irish Water has also halted training budgets and is “cutting back on everything. It is very difficult to do business with them.”
He said the replacement of a stretch of pipework at Castlefore, Co Leitrim “was our number one priority this year. We wanted to do two sections and now we are being told that this work is not going to be done this year.
“These are bursting week in and week out. They need upgrading,” he said while head of finance, Vincent Dwyer, acknowledged that the council's had a budget overspend in 2019 because of an overtime bill in dealing with burst mains across South Leitrim.
“We have raised this with Irish Water but the truth of the matter is they don't have the money. We are just keeping essential works going,” said Mr Dwyer.
Mr Gaffney vowed “there will be nobody left without water. If supply goes overnight and we can fix the problem and it is safe to do so, we will do it. We don't care about (Irish Water's) overtime budget.”
Cllr Caillian Ellis asked if the council could look at installing a number of valves along problematic supply lines so water could be turned off and conserved in the event of a burst.
Mr Gaffney said he would see what he could do but it would require the agreement of Irish Water. He said previously councils had a discretionary budget which could be used to finance these kind of works but now “we have to jump through hoops to get anything done, to prove we need to do it”.
In a statement issued to the Leitrim Observer this week, Irish Water said “decisions have not been finalised yet as to where funding will be allocated for 2020”.
A Draft Investment Plan was submitted to the Commission for Regulation of Utilities in November 2018 and since then Irish Water has reviewed this portfolio, prioritising projects and programmes “based on new and better information, updated timelines as projects progress as well as new and emerging needs in our water network to best serve our customers, support growth and meet the objectives under our business plan.”
They said key outcomes such as leakage, water supply zones removed from the EPA’s Remedial Action List, areas where raw sewage is entering the sea and areas identified by the European Court of Justice under the Urban Waste Water Treatment Directive all take priority.
While they accept delivery timelines for the upgrade of Carrick-on-Shannon water treatment plant “cannot yet be confirmed” they are “committed to providing a safe and reliable water supply, protecting the environment and supporting the growth of homes and businesses.”
Irish Water will continue to work with the Council “on a daily basis” to meet these goals.