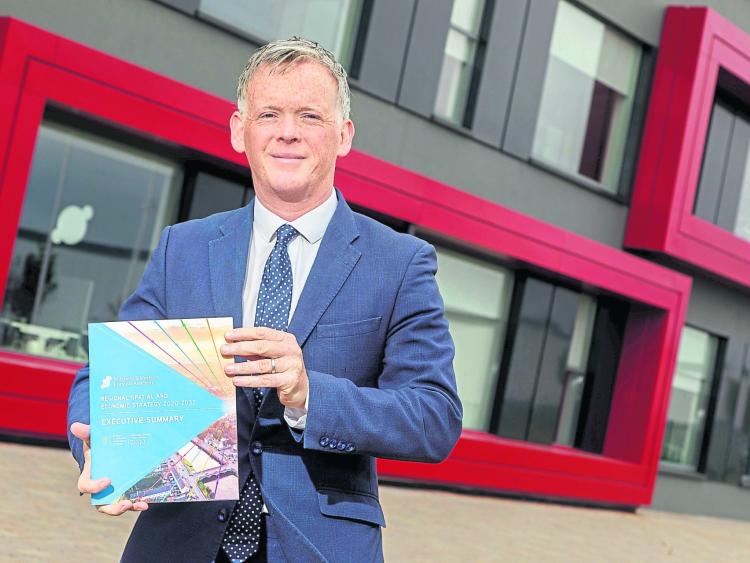 David Minton, Director of the the Northern & Western Regional Assembly, pictured at the launch of the plan

A plan aimed at effectively addressing the commercial, industrial, economic, and societal imbalance between the east and west coasts of Ireland has been launched by the Northern and Western Regional Assembly (NWRA) and includes a strategic role for what it terms as key towns such as Carrick-on-Shannon.

The National Planning Framework, published in 2018, recognised the weaker urban infrastructure in the region, and calling for more compact growth.

The Regional Spatial and Economic Strategy (RSES) creates an overarching template for how Galway, Athlone, Sligo, Letterkenny and other communities in the West and Border regions must develop over the next 20 years to cater for huge expected increases in population.

The NWRA represents regional government in Ireland. It is one of three Regional Assemblies, working with key stakeholders at EU, national, regional, and local level to accelerate regional development.

The new RSES aims to transform the region between now and 2040 with a new, focused and more strategic delivery of housing, transport infrastructure, healthcare, education and childcare – while also developing more employment clusters in high-value sectors such as tech, advanced engineering, food and medtech.

It’s a shift in thinking and how Ireland plans infrastructure. It breaks the chain of uncoordinated, incoherent and short-sighted ‘business as usual’ development that has served the region poorly in the past.

Along with the Metropolitan plan for Galway, the RSES outlines tailored Growth Centre Plans for the larger urban centres of Sligo, Athlone and Letterkenny that expect to see a 40% growth in population, while the overall forecast for the West and Border area is for a population increase of 180,000 by 2040.

The plan itself also envisages a strategic role to be played by key towns across the region such as Castlebar, Carrick-on-Shannon, Cavan and Monaghan Town. Brexit – the UK’s exit from the EU - will too have a significant impact, and will require a reorientation of our economy, with a focus on the regional dimension.

The RSES brings together local, regional and national resources to deliver a compelling vision of a sustainable region with modern infrastructure and services, exciting career opportunities and an environment conducive to work-life balance.

Its goals are in keeping with the obligation in the Government’s National Planning Framework for the development of an even spread of business and industry across Ireland.

Commenting on the report launch, David Minton, Director of the Northern & Western Regional Assembly, said: “The RSES is a tool to re-imagine our communities and villages; our towns and urban places as we begin to remake our own future in a post-pandemic world.

“It is a portrait of how we learn lessons from the Covid-19 pandemic and deliver real change for people. The strategy charts a path for high net remote working, more affordable housing, safer cycling and better work-life balance through concepts such as the ‘10-minute town’.

“We never imagined that we would be launching it in a context of a crisis such as this, but we believe that the need for such a transformative tool could hardly be greater right now, and we hope the strategy has the chance to inspire us and other places.

“The RSES is as essential for Dublin and the east coast as it is for the West, North West and Border region.

“For too long development in Ireland has been allowed to happen in a haphazard way that has made Dublin sprawl inefficiently into its neighbouring counties while the West, North West and Border regions have languished without proper services or infrastructure. It is time for change. The RSES will provide that change, in partnership with the local authorities and other stakeholders.”

For that reason, ‘placemaking’ by moving to a more sustainable model is essential to the strategy.

This involves:
• Moving away from an inefficient energy model to a low carbon, green and renewable one.
• Building the capacity of human capital to move from ICT to biotech/advanced technology.
• Transforming from a dual economy to an inclusive economic model focusing on resilience and sustainability.
• Maintaining an inefficient energy system and transitioning to low carbon, green and renewable practices.
• Promoting circular practices with an ecological principle around replenishing.

Cllr Declan McDonnell, who is Cathaoirleach of the NWRA, said: “The strategy is essentially a contract between local, regional and national leaders on priorities to attract, retain and grow investment, business and talent, to create jobs, and to support sustainable economic growth in the West and Border region.

“The challenge for central government and our region is to build long-term competitiveness so that all regions can contribute and share in the benefit of growth.”

John Moran, chairperson of the Land Development Agency, said: “What’s nice about this plan is that it puts people and place at the top of the list of priorities, which is essential for Galway to reach its growth potential and attract or retain talent.

“If we are to develop a counterbalance to a dominant Dublin it is critical that cities like Waterford, Limerick, Cork and Galway develop in collaboration with towns like Sligo, Letterkenny and Athlone to form a coherent alternative cluster.”