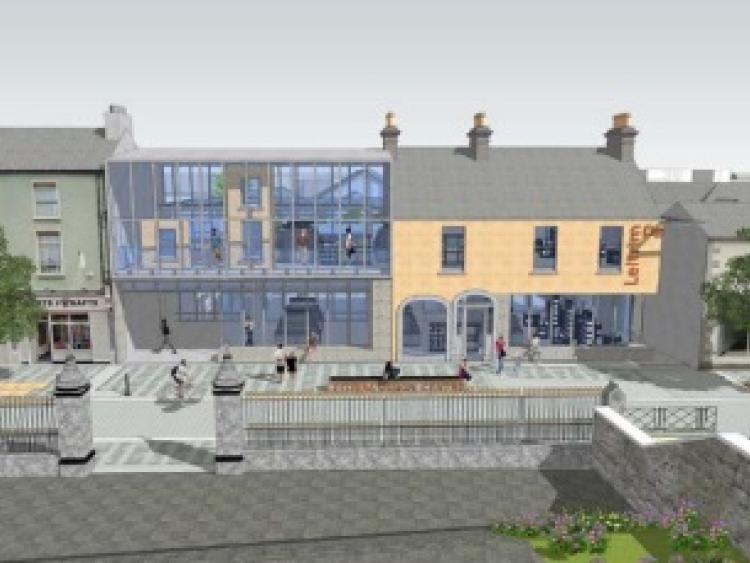 Cllr Des Guckian has accused Leitrim County Council, Chief Executive, Lar Power of “declaring war on the Geraghty family” and told him to call off “the dogs of war” and abandon a concept proposal to create a destination centre on Main Street, Carrick-on-
Shannon.
While the proposal is only at concept stage and has not gone through the design or planning stages, it has already caused upset for the Geraghty family who reside and have a business in one of the buildings which could be demolished if the proposal becomes a reality.
Ultimately three buildings and four businesses could be impacted by the proposal and it has become a source of controversy for the Council in recent months as the Geraghty family have expressed their total opposition to the project and their upset and not being directly informed that such a proposal was being considered before funding was sought.
To date the Geraghty family have collected over 9,000 signatures on a petition against the proposed development.
At Monday's Council meeting, Cllr Guckian said he accepted the need to apply for funding for projects for the county, however he objected to the concept proposal.
He asked Mr Power to call off “the dogs of war” in relation to the project and made a number of accusations in relation to the conduct of Mr Power before calling on his fellow councillors to “condemn what is to happen and what is continuing to happen”.
He asked Mr Power to withdraw the concept proposal and said he should be asked to “consider his position”.
However, no councillor seconded Cllr Guckian's motion. While a number said they supported the Geraghty's, they stressed they could not back Cllr Guckian's motion due to the language used and in light of his personal attack on Mr Power.
Cllr Brendan Barry said while he supported the Geraghty family he didn't want to be associated with any of the remarks of Cllr Guckian.
His Sinn Féin colleague, Cllr Padraig Fallon added he had “no doubt” the Geraghty family should have been informed personally about the proposal acknowledging what happened to them was wrong and should be addressed, but he said “some of the language used in (Cllr Guckian's) motion is something I have difficulty with, especially the personal attack on individuals”.
He said he had been contacted by former Sinn Féin colleague, Seadhna Logan with the suggestion that the proposed project be “moved to Bridge Street, where there are a number of vacant properties, some of which are for sale”.
Cllr Enda Stenson also stressed that “while the Geraghty family has my full support I don't want to be associated with the language used in (Cllr Guckian's) motion today”.
Cllr Sean McGowan also expressed his concern over the language used in the motion. He acknowledged the treatment of the Geraghty family “isn't good enough” adding the situation was “badly handled no matter what way we turn it” but said that he could not back the motion.
Responding to the motion Director of Services, Joseph Gilhooly said it is not a requirement “nor can it ever be that affected parties are briefed before concept proposal are submitted to government departments for funding”, but he said the executive, following a separate motion from Cllr Stenson, would endeavour to “brief pertinent affected parties” if a concept “may ultimately involve the acquisition of their home or business before any external party discussions take place.” He denied the proposal was “ill-conceived” and said it “will be pursued”.
Also responding the Chief Executive, Lar Power, said that he took exception to the comments made by Cllr Des Guckian and said that the interests of the Geraghty's and all stakeholders were protected by the procedures which would take place if funding was granted and the project moved to design and planning stages.
In light of the lack of support for the motion, Cllr Padraig Fallon asked Cllr Guckian to amend the wording but he refused to do so saying his “motion is very straight and clear”.
Cathaoirleach, Cllr Mary Bohan again called for a seconder for Cllr Guckian's motion but none came forward.
Cllr Fallon again urged Cllr Guckian to change the wording of his motion but he refused to.
Cllr McGowan pointed out that “at the end of the day this proposal is going to come back before the Carrick-on-Shannon MD members” and Fine Gael's Cllr Enda McGloin agreed this discussion “is a matter for the municipal district”, asking if the full council will have any say on whether the project proceeds or not.
Mr Power clarified that this will be a matter for the Carrick-on-Shannon MD if it proceeds through the next stages adding that the other 12 councillors from the remaining two municipal districts “will not have any say” on this.
He stressed that, if at the Carrick-on-Shannon Municipal District level, councillors were not in agreement with this project then “it wouldn't be taken against their wishes”.
Cllr McGowan proposed that the matter be referred back to the Carrick-on-Shannon MD with the full concerns of the Geraghty family to be considered. He also urged further discussion be undertaken with the Geraghty family.