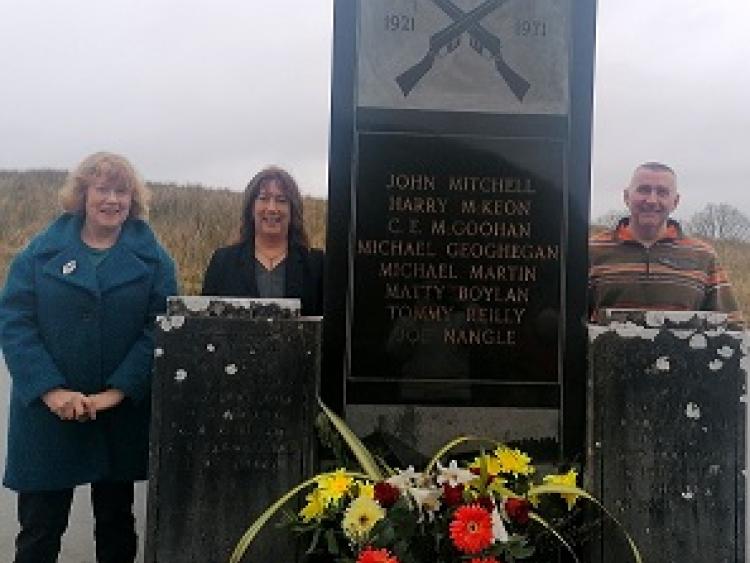 Living under the shadow of Sheemore I am pleased to join with my cousin Liam Scollan and contribute my thoughts and family history on the centenary of the Sheemore ambush.

My late father James McWeeney, a twenty year old at the time living with his parents and sister, was taken from our home on the afternoon of March 4, 1921 by the Black and Tans.
I imagine he was suspected as he was living only a few hundred yards from the ambush.
He was transported to Carrick Barracks on a military truck and beaten up, resulting in him spending time in the Old Hospital in Carrick.
Our old home at Sheemore was threatened with burning and the family, with two young children, had to take refuge in a barn fearful of the outcome.
The Sheemore Ambush monument was erected over fifty years ago on a site donated by the Mollohan family and paid for by donations from the local community and friends.
Naturally, time has defaced its appearance and no funding is available at the moment to improve its appearance.
The eight young men who fought in one of the most significant events in the War of Independence in Leitrim deserve to be remembered always. It is my belief that now is an opportune time for our local representatives and public bodies to consider enhancing this treasured historical monument.

It would be our hope that the Sheemore Ambush monument would continue to be a place where all of us can commemorate our shared history.
This boreen is increasingly used by walkers who come from Carrick and beyond. This monument will continue to be a reminder to passers-by and to the many generations to come after us and our hope is that they will realize fully and appreciate all the more the freedom we enjoy today.

Finally, we take this opportunity to extend our condolences to Jim, Patrick and extended Gilmartin families on the death of Thomas Patrick Gilmartin and we thank him for his generosity in giving public access to Sheemore over his lifetime.
May his gentle soul rest in peace.
Rita McWeeney