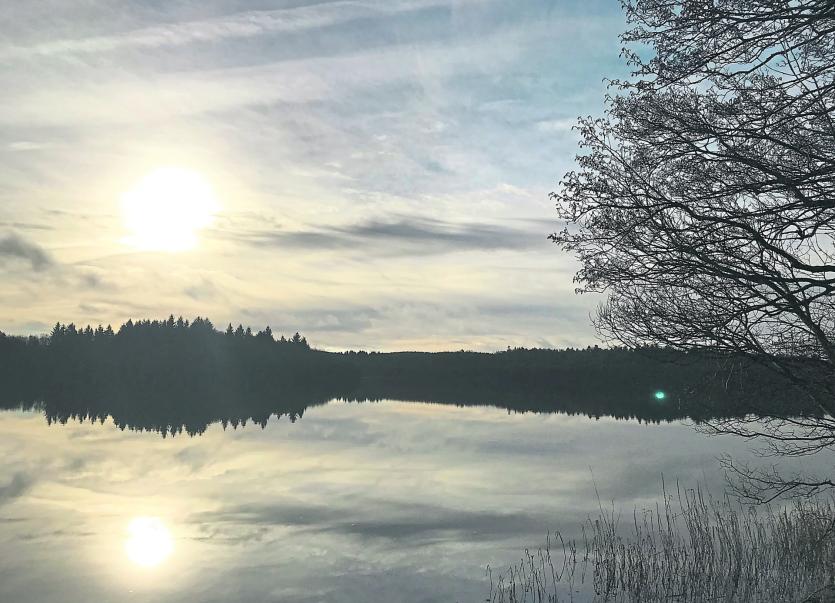 Nearly a day. The beautiful Garadice Lake beckons me

After thirty years working in proper jobs... and by that, I mean physical jobs where you get lots of hardship... and lots of talking about how much hardship you’re getting and even more talking about getting another job with less hardship and more talking... and maybe if we had talked less and done more, we might have had better jobs, but then we’d have had nothing to talk about.
Anyway, when all that stopped and I became a fulltime talker and writer and actor and all the other eegeting I do be at... People would come up to me and ask, ‘What does your day consist of?’
Good question, as I had obviously decided to stop working - opt out, give up, or simply run away with the circus, as it were. Well here’s what it consists of...
I wake up in Druminchin (Druminchingore), there’s a few Druminchin’s in south Leitrim and it’s always good to wake up in the right one.
I don’t set an alarm, but I wake early – okay, most of the time I wake early – I’m usually woken by the heating coming on or by a milking machine from across the lane – both positive things – the oil is not gone – our good neighbour is alive!
Or in spring and summer, I might be woken by birds singing or crows tramping about on the roof over head... we’re surrounded by trees, (the broadleaf variety) chestnuts and ash, so there’s birds, lots of birds, the dawn chorus and all that and then, in autumn, you could be woken by a conker falling, smashing onto the slates ... a ‘what the f*** is that’, type of an awakening... or wind... Sometimes the wind howls, sometimes it’s outside and sometimes it’s not.

So now I’m awake – I haven’t opened my eyes yet, but I’m conscious and alive... that’s a good start, but opening up the brain is like opening the door of our hot-press below... everything falls out – nothing has been put away neatly... a flood of thoughts - lines from plays. The play you’re learning, the play you’re trying to write, the thing someone said, the thing you should remember... The things you have to do - that thing for the Observer, that thing for RTE, that thing you were asked to do for free... ALL those things you were asked to do for free – Thank God we still have oil! That’s funny wind?
I open my eyes – Oh it’s not wind, it’s a milking machine... funny how you can hear better when your eyes are opened.
I open my eyes and yet I don’t see the room (that might be no harm), but I see the ‘line’ more clearly now – ‘Mossy Flood decided to have a surprise birthday party for himself and so he told nobody.’
Yea that’s not bad... and I need a piddle... in a minute, because there’s another line... and then there’s a line you remember from a dream or your conscious sleep... what was it?
It was a good one – you need to get up and piddle – that milking is going on a long time or is it actually wind after all? A piddle would be good.

Croke Park again and the cows not milked!

What day is it? Is it deadline day? Better ring me mother today, find out who has died.
When did I get heating oil last? Did I pay insurance? This room was yellow... why did we paint it yellow? What loss what colour it is! What was that line? I need to piddle! That is wind be Jasus! What time is it?
The radio clock is flashing 12.00, the power must have been off... it’s surely wind so and so why is Ivan not milking... must have slept in, that’s not like him. If I turned the other way, I mightn’t have to piddle for a while, or at least until I think of that line.
What was that line – something about appreciating your lot, even when you’re not aware of what you are... How do you say that in a few short words?
Leitrim won again! Yea! Oh yea – we had a few pints last night to celebrate. That’s why I need a piddle, although lying on this side is better now!
There’s a cow roaring... must have heard that Leitrim won or is she running her milk because her farmer slept in? What time is it? My watch must have fell off again!
It’s dark enough for morning, but then it’s only March... only just March and on the brink of promotion... Croke Park again and the cows not milked!
What time is it? The phone! I’ll look at the phone and Facebook when I’m having my piddle. Oh, There’s the phone!
I was tweeting before I went to sleep. 15 retweets, that’s not bad. And it’s only 2.20am. It’s not the day yet or even the day after. It’s just time to do a wee!