A day in May - helping to gather our fleeting foe 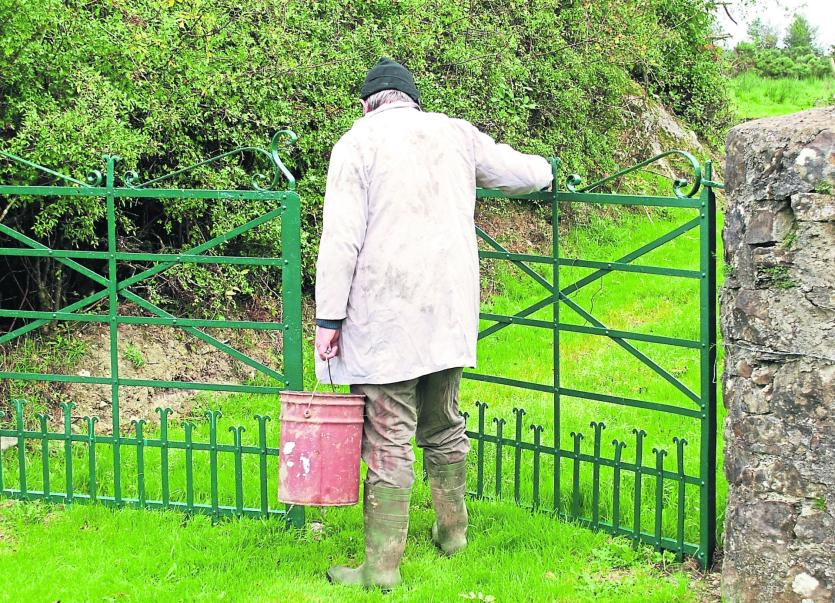 A day in May

On a day in May – long before men could marry men – when bachelors roamed my world in South Leitrim; when we knew less than anyone could give us credit for... and ignorance was for half nothing – our cattle got away... near the cross. It was the early 70’s.
They had been housed for the winter in a small house – bumper to bumper for 6 months – a steam rising when you opened the door – the twelve foot by twelve foot keeping them square and dry. They had bedding and a small window to look out and where air came, sometimes in.
They were well looked after in our book. Bullocks in bondage, but the alternative was standing out in the rain, sheltering under a bush... pick a bush, any bush or whin – no, they were better in - and easier counted.
And then there was Spring and fresh buds and even the whins had something to show – they had their own yellow – for yellow was everywhere – the dandelions, the buttercups, the daisies.
The ladies in yellow and the rushes wore green – the Leitrim colours for that very Leitrim scene. Green and yellow everywhere. A new growth and some new grass – at last – the winter blanket had been taken off and light and hope shone through again – time to begin again – time to let out the cows.
And letting out the cows was no big deal, the cows, our ‘Cows’ were pets... fondled and rubbed and milked... most of them had names – not fancy, nancy, affectionate names, but proper, practical names like – ‘The Red One’ – ‘The Blue One’ – ‘The Kickity One’ and so on.
And when they got out, they sauntered and strolled and ate grass and waited to be called back that evening for their tea... their evening meal and hay and a rest... they weren’t out at night yet.
But the weanlings across the way - our last year’s calves – the brutes in waiting – just waiting to find the door ajar – They’d go far, because they were different.
For them, getting out was not a stroll... No... there was a whole world out there and all they had was life pulsing through their bulging veins.
And to make life more interesting than it already was, we wouldn’t put them in a field near the house... No, me and the brother would be sent with these leapin’ hoors down to Druminchin, a mile or so – and so, for the first time that spring – the cattle were no longer in – they were out - and it never crossed their mind to stay, to co-operate, to line up in an orderly way or fashion – No – these fellas had passion and couldn’t turn down a chance to play and lep badly fenced gaps and buck-lep through small meadows and drains and fairy forts.
They went off the road at Clougher cross and across Fitz’s field and up the hill and into Lee’s and back out at ‘Jinny’s Turn’ and then on - towards Newtown... You see, it wasn’t just grass they craved... it was air... fresh air and the dare... they dared to cross borders and fences, a relentless quest for freedom and they ran till kingdom come...
And all our bachelor neighbours, one by one came bounding out of their houses... to help gather our fleeting foe – and although they were not fleet of foot themselves – they stood in gaps and helped themselves to shouting obscenities and their otherwise doldrum day was sweetly interrupted by mad galloping bullocks that shall always remain nameless – gone mad with spring and air and dare.
And these same men were good men, our neighbours... These bachelor men – men who never married men or women... men who sadly sheltered on their farm, where no harm or good could come of them... unlucky in more than love.
And God above looked down and frowned on them and heard their prayers and left them sheltered there – where no harm or good could continue.
And who am I to say, which of them stood there with wistful eyes... which of them disguised their hurt and pain with no blame or shame – but regurgitated conversation and making light of all men’s plight and saying, ‘That’s the way’... Those men would never see that other day in May. Most of those men are gone or old... and never told a soul what lay inside.
And somehow our beasts were found and bound to our peace and theirs... and where’s the harm in stretching out in spring?
Coming out – once – and kicking up and making fuss and fun... Where’s the harm? There’s none! Thank God for change and less ignorance.