Putting the gorilla back in his cage, pints and broken dreams 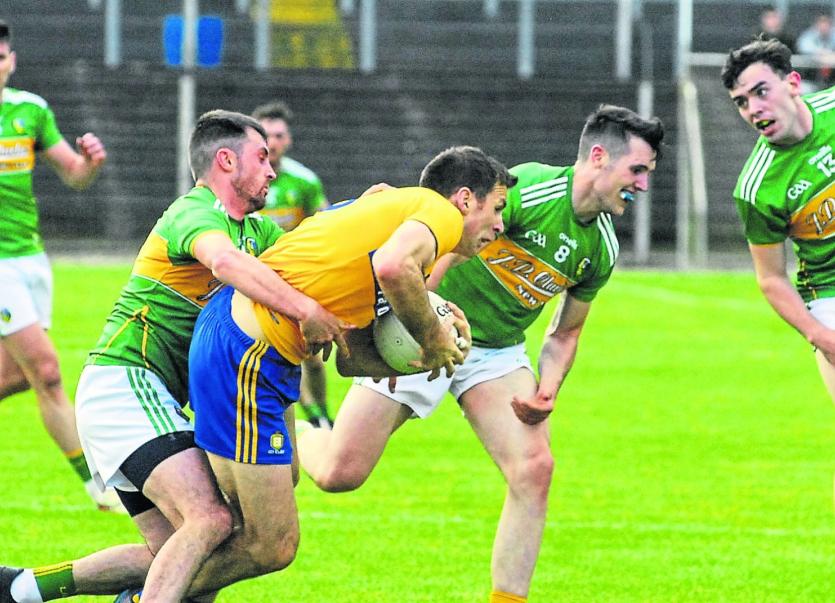 The latest outings by the Leitrim team has me recalling my own days on the pitch.

The man from Drumkeeran with the loud voice – who went to all the matches – he called me it first... ‘Put that gorilla back in his cage’. That’s what he shouted – and the nickname stayed.
We were at a stage in the game when things were getting tight. There hadn’t been a fight or dirty play, I just happened to run into this lad who was coming the other way and he lay on the ground gruntin’ and inside I was gruntin’ too, but I was thick - too thick to lie down and anyway there was never any part of Drumkeeran’s old pitch comfortable enough for lying down, so I sucked in air – the small bit that there was to spare and I smiled.
That was me... too nice, too laid back, too slow, too old.
That’s why I could never get a good go at the good lads, I never heeled up the danger men – no, I just hit lads who weren’t looking where they were going and now, they lay on the ground moaning.
‘Ah get up – he’s only winded‘. That’s what our crowd said. He was only sixteen, the poor fella. He didn’t think he’d get a game let alone get run over by a big gorilla.
It wasn’t a crunch game, pardon the pun... it didn’t really matter who won, we were both much the same.
Both teams out of the championship and nestled somewhere in the middle of Division Two – they wore maroon and we were always blue. We were both part of the middlin’ crew.
It was the late-nineties – some of us still wearing our county togs from the mid-eighties, a good bit tighter now with faded stripes of yellow and green, bodies no longer tight and lean as if they ever were... just more tired and broken down, weighted down with broken dreams, not much point dreaming from here on in – a pint would be nice in ‘Peters Inn’ or Ballinamore on the way home – and yer man at the goalpost is still roaring – ‘Ya wouldn’t do when you were playing for Leitrim’ – he was right and I have a beard now too, which makes me look exactly like a gorilla... I’ll head back to my cage soon... you don’t have to keep saying it.
It was all very different when I was fifteen, it was all in front of me back then – Now all that’s in front of me is a belly and a big pair of didi’s – Oh and a pen, that will one day be my sword... and not a word to the ref, he’s from North Leitrim, he’s liable to do anything.
He’s fierce small and fit, whoever he is – I wish I could keep up with play like him and he still has enough wind to blow the whistle – he must be getting paid by the note, because he hasn’t stopped blowing and throwing up the ball when you call him a clown.
There’ll be a good crowd in town tonight, there’s music in ‘Pats’ and our backs are all over the place, when my man goes running through... they’ll have to do something... there’s only one thing to do – take off the corner forward.
This lad on the ground is gonna have to go off or the pubs will be closed in Carrigallen, by the time this game is over.
The sergeant has got fierce dutiful of late... and the same lad doesn’t discriminate when it comes to who’s drinking late... These Saturday evening matches are a disaster!
What’s wrong with a Sunday morning, when you could have a right good session the whole day after – And anyway Leitrim should be split in two, we should never have to go any further than Drumshanbo for a game and I’m sure the northern crowd would say the same...
They’re bringing in a door for this lad, I hope he’s okay... Better say nothing or I could start off yer man at the goals again.
Wait – he’s struggling to his feet, they may go back with the door – where did they get the door and no dressing rooms or buildings within half a mile...
This fella is well shook, he’ll not make mass tomorrow and he’s still wearing Batman underpants, a diet of crisps and jelly beans when he should be having a bet-up-egg – his legs are like hay ropes - he’s the last sub, so he’ll have to stay on.
He’ll have to play on till he’s as big and as old as me and full of pints and broken dreams and if he’s lucky he’ll have faded county socks and togs and what’s the odds on him playing in Division one.
None... or maybe this young fella is better than me.