Signs of deer in Carrigallen - what next - bears? 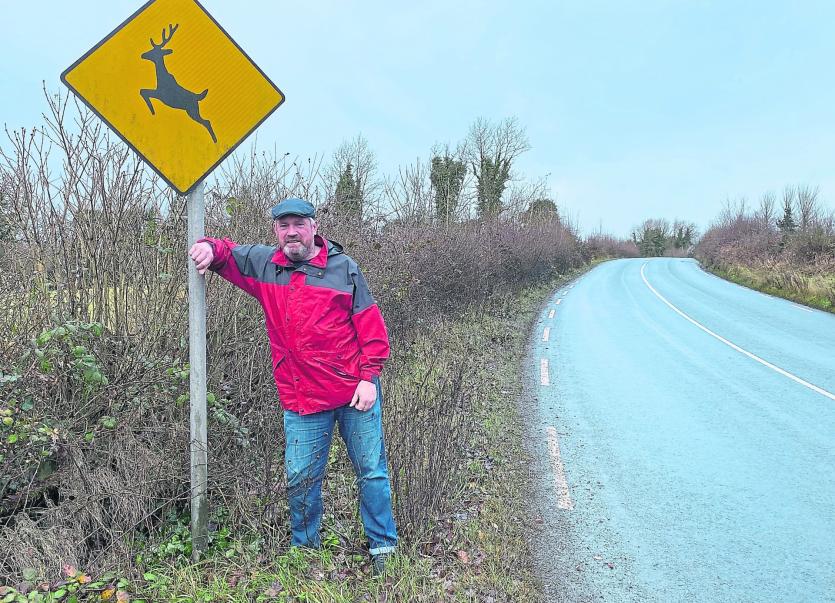 The deer sign was erected about ten years ago, near the football field. The thing is, in 54 years of toing and froing from that town – I have never seen a deer - peep, leap or swagger onto the road

The sign was erected about ten years ago, out near the football field – I remember the excitement that ran through me when I first saw it. A sign with a deer on it, in Carrigallen – what next, bears?

It took a few days to get the sign up and straightened, but it was worth it, it would catch your eye. ‘There’s deer in these here parts’ – That’s what it says to me!

The only thing is, that in fifty-four years of toing and froing from that town – I have never seen a deer - peep, leap or swagger out onto that Mohill road.

Maybe like the Kit-Kat ad, the beasts only come out when I’m not there or have my eyes closed, but I don’t think so.

There’s obviously something more to this mysterious sign. Maybe it was the start of an art installation that got shelved due to the economic downturn. Maybe it’s a stand-alone piece. A lone deer on a road where there’s no deer – what does that say? – That we are alone, always seeking attention, yet no one passes the slightest bit of remarks – Yea, there’s something in that.

But the thing is, we Carrigallens wouldn’t be the greatest drivers at the best of times and fine art is certainly not our forte – so maybe we should be encouraged to just keep between the ditches instead of inspecting them for deer or antelope.

There is however another theory that Leitrim County Council had deer signs left over from the deer age (the boom) and, sometime later, the lads in charge of putting up road signs had a gap in their calendar.

‘There’s a deer sign, put it up in Carrigallen, no one will ever notice’. Or maybe the sign is not for the road user at all, but for the deer themselves.

Perhaps it says in deer language - ‘Don’t go out onto that road or you’ll be kilt by a car!’

But the positive side is, no one has been ‘ran over’ or hit by a deer since the sign went up. In fact, that should be the least of your worries as you cautiously enter or leave this south Leitrim village.

You’d be more likely to have the snout taken off yourself by a load of badly built round bales hanging off a ‘just about roadworthy’ Scania truck.

It is also at this very point in the road, near an ancient hairdressing site, that you are more liable to meet an ‘old dear’ in a small car doing a thirty-three-point turn, with nothing showing above the dash, apart from a purple perm and a lock of St Christopher medals.

Then there’s the Mart crowd, a mobilised unit of nomadic herders, who drive around with their livestock in tow. The global warming emissions coming from the off-road transport, matched only by methane gas-clouds emanating from the trailer.

These hardy custodians of our landscape would make shite of a deer, if a deer was to tip-toe out for a peek at our sparsely populated community. There’s a greater danger of getting hit by a size five O’Neill’s football that has missed its target above at the pitch and on a trajectory that will bring it closer to the deer sign, than to any goalposts.

When I think about it – there’s ‘Boy Racers’ going that road – doing donuts around the deer sign – There’s a woman from Cloone goes jogging that road with a pushchair and side-car, with about four childer hanging out of her.

There’s a man drives in and out that road on his lawnmower.

I’m not complaining, I’m proud of the fact that we have a deer sign in Carrigallen – Many’s a community would love to have the sign, especially ones near to a deer or two.

And you never know, it’s coming up to Christmas, maybe a herd of reindeer will come bounding out from the forest to join us on the road as we walk to town with our high morals and hi-vis jackets and then hours later console us as we meander in the opposite direction with neither morals, jackets or the price of a lift home.

There’s a new brightly lit footpath that goes all the way from the village out to the deer sign.

After that you can shake a smidgen of magic dust on the road and hopefully Rudolph will step out from the hedge to escort you the rest of the way.

Whatever way you look at it, this sign gives our humble village a sense of mystery and sophistication, which must be the envy of our more embryonic neighbours, who in spite of their numerous championship medals and ‘Men Sheds’, are simply in the ha’penny place when it comes to deer signs.

Have a great Christmas and watch out for the deer!