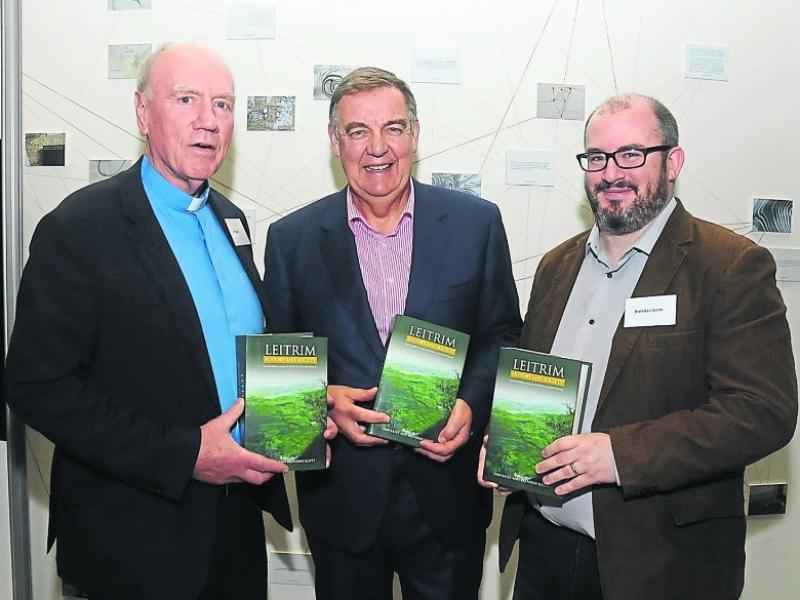 Bryan Dobson launched the book Leitrim: History and Society in Aras an Chontae recently. Bryan is pictured with the joint editors of the book Monsignor Liam Kelly and Dr Brendan Scott

A new book, entitled Leitrim: History and Society has been published recently to great acclaim.

Consisting of almost 900 pages of fascinating text, photos, maps, tables; this book covers many interesting aspects from Leitrim's history, ranging from its physical landscape, its prehistoric past, its medieval history (500AD - 1500AD), the Spanish Armada, and the Great Famine to its current landscape and the quest for a sustainable future for Leitrim.

This book is the most comprehensive history ever published about Leitrim.

In a series of 35 very readable chapters, written by 35 eminent historians and well-known local writers, Leitrim's chequered history is revealed in chapters about some of its best-known people.

You can read about icons such as Séan MacDiarmada, Frederick Hamilton, Jimmy Gralton, John McGahern, Fr Thomas Maguire and many more.

There are also chapters about momentous events such as plantations, revolutions, elections, population increase and decline, sporting contests, and the experiences of its people shaped by their religious allegiances, Catholic or Protestant.

This is no academic tome; typical of these latter chapters is Tommy Moran’s chapter on all aspects of sport in Leitrim since 1800.

Others include Ballinamore man, John Logan who writes on ‘Leitrim and the 1914-18 war’, Mohill man, Pat McGarty on ‘Leitrim Politics and Society, 1916-22.’

Máire Doyle, now sadly deceased, writes on John McGahern and Ruth McManus on the future of land use in Leitrim.

This wonderful history is co-edited by Monsignor Liam Kelly (originally from Kiltubrid) and Dr. Brendan Scott ( from Ballinaglera).

For the publishers, Geography Publications, Leitrim is the 27th county to have its history published by them in their Irish County; History and Society series.

A limited edition of 500 books have been published of this Leitrim volume.

This book would make an ideal gift at any time of the year, for a relation or friend or for a Leitrim person living abroad.

It will be a much sought after book in years to come.

It is €60 RRP and is available in retail outlets throughout the county as well as online.

Bryan Dobson, of the Dobson family, Mohill and of course one of RTE’s best known and most popular broadcasters launched the book on December 6 in Áras an Chontae, the County Council Offices in Carrick-on-Shannon.