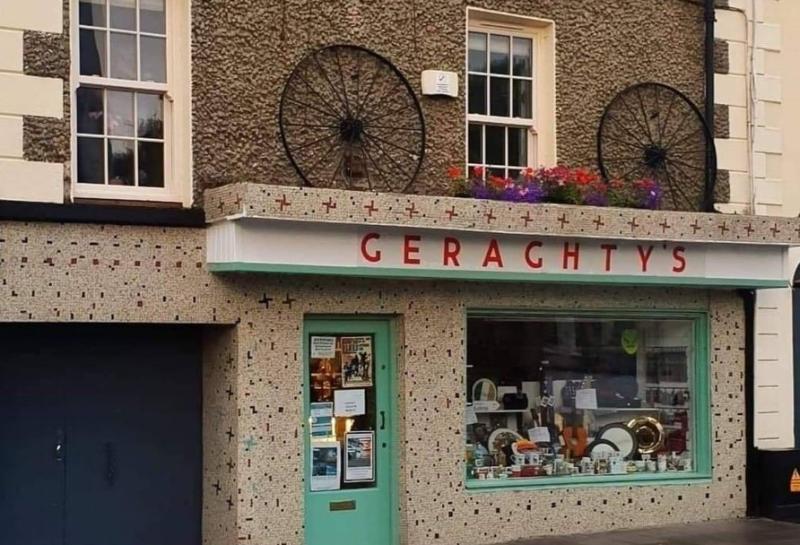 Following thousands upon thousands of readers' votes and after our expert judging panel reviewed our shortlist of our final four buildings Geraghty's shop in Carrick-on-Shannon has emerged as the winner of Leitrim's Favourite Building.
The shop emerged as a serious contender for the title from the start after receiving a large number of readers' nominations and quickly emerged to the forefront on our poll alongside the other top three finalists - Sean MacDiaramada's homestead in Kiltyclogher, The Corn Mill Theatre in Carrigallen and the Old Barracks in Keshcarrigan.
We then handed the final decision over to our judging panel who later wrote “Having studied carefully the shortlist of four entries we have decided that Geraghty's of Main St, Carrick- on-Shannon is the winner.

“The remaining three all have very historical connections and are well known throughout the County, nevertheless Geraghty's has been in the ownership of the same family for four generations and is still trading as a retail outlet to this day.
“It dates back to the 16th and 17th century and is a premises of old Carrick- on - Shannon. The fact that it is still operating under the Geraghty family for over 70 years is the deciding factor in our opinion .”

And there was no doubting the absolute delight of the Geraghty family on hearing that they had won.
Kathleen speaking on behalf of the family told the Observer “We are so honoured and humbled to accept this award as custodians of the building known as Geraghty’s.
“It gives us so much happiness that you the people from near and far, and the panel of judges, all deem our building, that is part of the original town of Carrick, worthy of this award. Thank you to the Leitrim Observer for running the competition.
“We have always strived through good times and bad to conserve the character of the building with respect to the town’s heritage.
“An opportunity came in the 50’s when a tile factory opened up in Roscommon to purchase the handmade mosaic tiles, which take centre pride of place on our façade. In view of St Mary’s church and in the month of Feb 1953, inspired Pat and myself to embed the mosaic in the style of St Brigid’s Crosses.
“ With the canopy erected to incorporate the old wheels that were housed in the stables out back, each year we accompany them with our favourite geranium flowers; a tradition we still hold to this day and in the future to come.
“We are at a loss for words, as we are still coming to terms with being nominated, shortlisted and now this validation from you.
“Thank you all. We pray to see you again within our walls, we look forward to our chats, laughs and the banter with you again. A million times ‘Thank You’ each and every one of you.
“With the most heartfelt thanks.” - Kathleen, Linda, Ella & the Geraghty family.

The judges had made their decision on their own experiences and also on the basis of the brief bio of the building which the Observer featured last week and read:
“Geraghty's Shop on Main Street, Carrick-on-Shannon has the distinction of being under the ownership of the same family for seven decades.
“It was a very popular choice for voters in our online poll on Leitrim's favourite building.
“The shop has a distinctive multi-coloured tiled facade which was put in place by the family themselves.
“In all, four generations of the family have lived and worked in this building and the family point out their building is of historic significance, noting “The building dates to 16th and 17th century Carrick-on-Shannon, it was the original part of the town centre of the historical Main Street.
“The shop was recently at the heart of a petition to stop a proposal to demolish it and other buildings on Main Street to allow for a new architecturally designed property which would serve, among other things, as a home for the Leitrim Design House.
“The family has also vowed to oppose any move to demolish their property and say they plan to continue the family tradition of living and working on Main Street for many generations to come.
“This year they will also be marking their 70th anniversary in the business.”
The editor of the Leitrim Observer would like to congratulate the Geraghty family, all our readers who took part and also our expert judging panel in our search for Leitrim's Favourite Building.