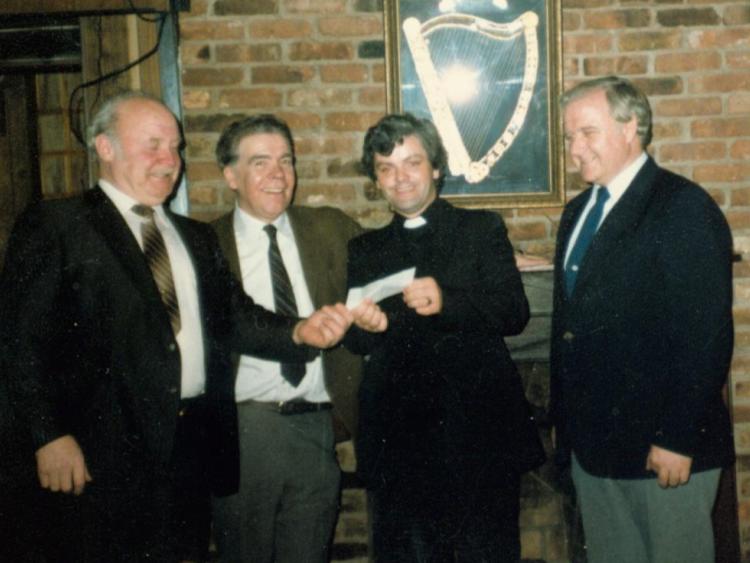 There was great sadness all over New York and in West Cavan and North Leitrim when news spread recently of the death of Joe Cornyn, who was born on March 19, 1933 near the village of Dowra.

Joe was one of the most successful emigrants of his era. He married Theresa (Teasie) Gildea, of Ballinaglera. They had two daughters, Maura and the late Claire. Joe is also survived by two grandchildren, Cara and Jacklyn, a sister, Theresa Smyth in London, and many nieces and nephews in Ireland and the USA.

His funeral took place on Tuesday, December 22 in St Margaret of Cortona Church. His burial took place at the Gate of Heaven Cemetery, Hawthorne, New York.

Fr Gerry Comiskey was unable to officiate at the funeral according to Joe's wishes because of the travel restrictions. He sent the following paragraphs to be read at the funeral mass by Fr Brian McCarthy. Fr Gerry was represented at the wake and funeral by his cousin, Deacon Don Quigley of the Archdiocese of New York.

My friendship with Joe and his family stretches back more than 35 years. He was born and reared in the vicinity of the little village of Dowra, which is the first village on the River Shannon.

Joe left his native place in 1957, and over the decades he emerged as a great business man as a restaurateur.

He and his wife, Teasie, opened their first steakhouse in Woodside. Over the years they opened other places, most especially the very well known 'Limericks' in Manhattan and the 'Coach and Four' in Yonkers. They were outstanding hosts and much loved by all their customers.

When I got to know them in the mid 1980s, I was a frequent visitor to New York, mostly to visit my aunts and cousins. I also went there as a fundraiser for Doobally Church, which is where Joe was baptised.

I was very fortunate in that Pat Kennedy from Blacklion chaired and led a most wonderful committee. They raised an enormous amount of money to restore the church in West Cavan.

Not only that, but they also united the emigrants from West Cavan and Leitrim in a most remarkable way. This resulted in a great reunion taking place in Dowra, Blacklion and Glangevlin in 1989.

During the months of fundraising, they often met in one of Joe's places. After the great fundraising dance in Gaelic Park, there was a celebration meal in 'Limericks'. Joe's hospitality and generosity was unbounded.

He was also a great benefactor to every appeal that was made in the Irish community, most especially if it was to help individuals or families who were experiencing any hardship because of illness or unemployment.
He was very unassuming and private in this regard, and never permitted us to say very many words about his unparalleled kindness.

What myself and others loved most about him was the social skills that he had with the general public. This became most noticeable when he was in the company from the north west.

He was a wonderful storyteller, highly intelligent, well read and a very shrewd observer about human nature, politics, education, religion and social affairs.

During my last long visit with him, he recounted the successes of many from the Dowra area who emigrated to the United States.
He was able to tell me much about the ancestors of Senator John Cornyn of Texas, whose father came from Dowra.

Joe had a most wonderful sense of humour. Even though his business interests meant that he did not get back to Ireland as often as he would have liked, the truth is his heart was never far from home.

This was most evident when he met people from Dowra, Drumkeerin, Glenfarne, Ballinaglera, Glangevlin and Blacklion.
It was wonderful to hear him recalling events from his childhood and his teenage years. He could give graphic accounts of places and remarkable insights into the people that he grew up with and clearly loved. Joe had a phenomenal memory for names and for details.

His respect for and friendship with those that he employed was just simply wonderful to observe.

In fact, the last few times that I visited with him in recent years I always met some of his former employees either coming out or going into the nursing home to spend time with him. This was also true of people from around and about Dowra. He was without a doubt much loved.

We all were very saddened to see him suffer so much in recent years. The death of Teasie and their daughter, Claire, caused him intense personal anguish. I know that in the wake of both their deaths, grief pulled his heart asunder.

Amazingly, most likely because of his intellect and his remarkable faith, he was able to learn to cope with all this pain.
When I talked with him last he was glad that the tears had stopped and that he had recovered some of his confidence, most especially in God's mercy and the promises of eternity.

He was lucky to have had great primary school teachers, but it was in the University of Life that he developed all his personal and business skills.

I am really sorry that I am unable to fulfil my promise to him to officiate at his funeral. It would never have occurred to either of us that a halt would be put to my willingness to travel 3,000 miles to say farewell and to salute Joe as he continues on his journey.

For sure, I will be praying that he will be able to make the crossing and that he will receive a warm divine embrace this Christmas.

I pray also that he will know the joy of being with his loved ones, including the long, long line of people that he encountered and made feel better because of knowing him.

In February last, Eddie Fitzpatrick, also from Dowra and very successful in the restaurant business, died in New Jersey. The story of both their lives had remarkable similarities.

Astonishingly, people like Kevin McGrath (Doobally) and Liam Cornyn (Newbridge), who were such good friends of Joe's and so very much younger than him, died in recent years. He lamented their deaths and the deaths of many others who visited him in his old age and with whom he loved to have conversations.

“May the Lord God grant his generous soul eternal rest.”