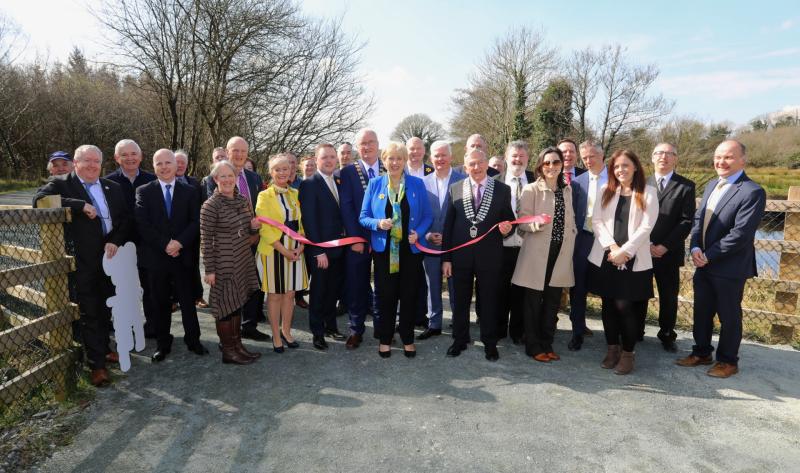 The official opening of the new recreational trail

The project, which will ultimately form part of a broader 54km greenway along the old Cavan to Leitrim Railway line, received €684,289 in funding from the Department of Rural and Community Development under the Outdoor Recreation Infrastructure Scheme. Additional match funding was provided by Cavan County Council and Waterways Ireland.
The new 5.5km trail links Ballyconnell and Bellaheady, along the scenic banks of the Woodford River on the Shannon Erne Waterway. The trail also provides connectivity to the existing Woodford Village Walk, a key amenity in the UNESCO Cuilcagh Lakelands Geopark.
Officially opening the new trail, Minister for Rural and Community Development, Heather Humphreys TD said, “Projects like this recreational trail are not just places where we can go for a walk, a run or a cycle. They are places where we can come together as family and friends, to enjoy the beautiful outdoors, and where better to do this than in Ballyconnell which is in the heart of the Cuilcagh Lakelands UNESCO Global Geopark in Ireland’s Hidden Heartlands.”
Chief Executive of Waterways Ireland, Mr John McDonagh said, “The recreational trail will provide a wonderful experience for local people, activity clubs, social and youth groups to enjoy. We look forward to working with Cavan County Council to deliver future projects along the Shannon-Erne to enhance the recreational opportunities for local people”.
Paddy Connaughton, said, “Working alongside our partners in Leitrim County Council and Waterways Ireland, we have made great progress in realising our strategic goal of developing the Cavan Leitrim Railway Greenway.
“Significant strides have also been made on the Western end of the proposed greenway, which will ultimately link Dromod in Leitrim with Belturbet in Cavan via Mohill, providing a world-class health and recreation amenity along the historic old narrow gauge railway line.”