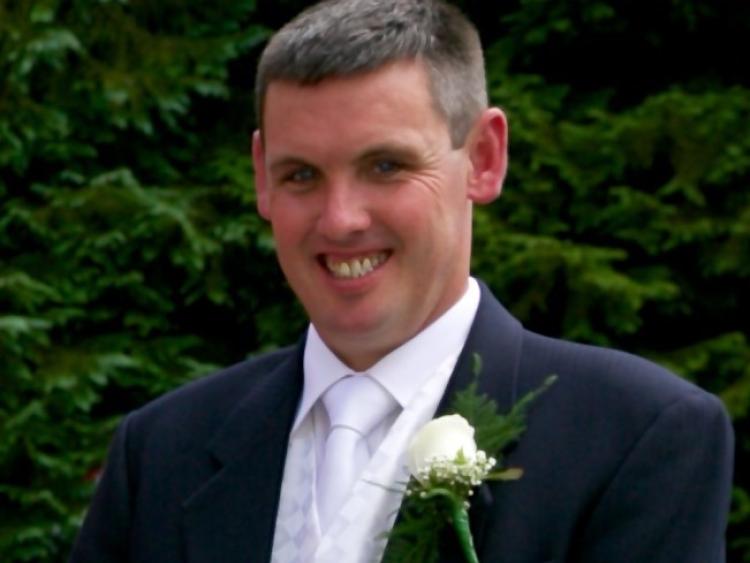 The summer of 2018 will long live in the memory for its unprecedented weeks of hot, dry weather but in those sunny June and July days, little did we realise that dark clouds of pain and grief were gathering on the horizon.
On Monday 16th July, the people of Gortletteragh and the surrounding area woke to the horrifying news that Oliver Leslie had died following a road traffic accident which had taken place just before midnight the previous evening.
The dreadful news cast a pall of grief over the area at the loss of a man who was known to all and whose work and support was relied on by many.
Oliver was born in August 1975, the first child of Kathleen (Higgins) and Peter Leslie. In the years that followed Oliver was joined by Noel, Colm and Jennifer. In the early days of 1989, the Leslie family was hit by tragedy when their father Peter died suddenly at the age of 38. Supported by his uncles Johnny and Tommy, Oliver took on the mantle of the man of the house, a role he fulfilled with dignity until the day he died. Just twelve months ago, he was a very proud man as he escorted his sister Jennifer up the aisle on her wedding day and afterwards at the reception spoke fondly and respectfully of how Kathleen had raised the family following the death of Peter. Oliver was a family man who constantly talked about his aunts, uncles and cousins with great pride and affection. In recent months, he had shared many happy times with his girlfriend Cathriona.
During his late teens and early twenties, Oliver worked at increasing his own herd of cattle. He was an expert stockman and was called upon frequently to assist with sick animals or particularly when a cow might be experiencing a difficult calving. Such was his expertise that Oliver had a calming effect both on the cow and her owner and in organising a herd test, neighbours would book Oliver to ensure his availability before they booked the vet!
Oliver drew cattle to marts in the area and also worked in the heifer sales ring. In the days following his death, there were many who recalled his help in making them feel as comfortable at the mart as he himself was. Over the years, he also guided young men at the mart as they were introduced to the world of work.
In recent years, having built up a fleet of machinery, Oliver worked on the farms all over south Leitrim as an agricultural contractor and was always reliable and dependable giving everyone the standard of service that he exacted on his own farm.
Oliver showed great respect for the traditions of the past and with his uncle Tommy, restored his father’s 20 Diesel tractor and took part in many vintage runs raising money for worthy causes.
He also enjoyed his annual trips to Coventry for the vintage shows. But Oliver also kept a keen eye on the present and attended the Ploughing Championship each year, bringing home the latest ideas. At the Knowledge Transfer meeting which took place recently on his farm, fellow farmers were highly impressed with the safety features of his crush including the anti- backing bars and head scoop.
Oliver was a gentleman. He showed respect and consideration to all with whom he came in contact regardless of age or circumstance. He appreciated the wisdom of older generations and was a kind friend to many and especially to his young neighbour Patrick Gormley who was his constant companion.
Despite working hard and to a tight schedule he was always ready for a chat and a mug of tea, never giving the impression of being rushed. In the days following his death, those who came to the Leslie home to pay their respects recalled a man of good humour and good works who constantly offered a discreet helping hand to neighbours and friends where it was needed. The caring visits of Fr Pat Lennon P.P., Fr. Peter Tiernan P.P. and Fr. John Wall P.P. were a great consolation to the family during this time as they listened to Oliver’s story and prayed with the family. Over those difficult days, tears flowed but so too did laughter as stories were recalled of his sayings, and the fun and good natured devilment which Oliver had enjoyed with his neighbours and friends.
Oliver’s removal to St. Mary’s Church Gortletteragh took place on Wednesday 18th July and on his final journey out the lane, Oliver’s remains were carried by his heartbroken friends and neighbours who had earlier prepared his final resting place. Following his funeral Mass, Oliver was buried in the historic Farnaught cemetery surrounded by the generations who went before and for whom he showed such great respect. The graveside orations given by his neighbours Aiden Kelleher and John Gerard Reynolds and cousin Seamus Shortt were fitting tributes to a man whose passing leaves an enormous, aching void in his family but also in the community as a whole.
St. Matthew tells us that at the end we will be judged by “Whatever you did for these the least of my brethren, you did it for me”.
Oliver was a man of faith who in his dealings with people lived the Gospel values each day. In mourning him, we ask the Lord of the Harvest and Gentle Shepherd to welcome Oliver to his eternal reward.
To Kathleen, Noel, Colm, Jennifer, John, Cathriona, the extended Leslie and Higgins families and Oliver’s neighbours and friends we extend our deepest sympathy in their devastating loss.
May Oliver rest in peace. Go dtuga Dia suaimhneas síoraí dó.