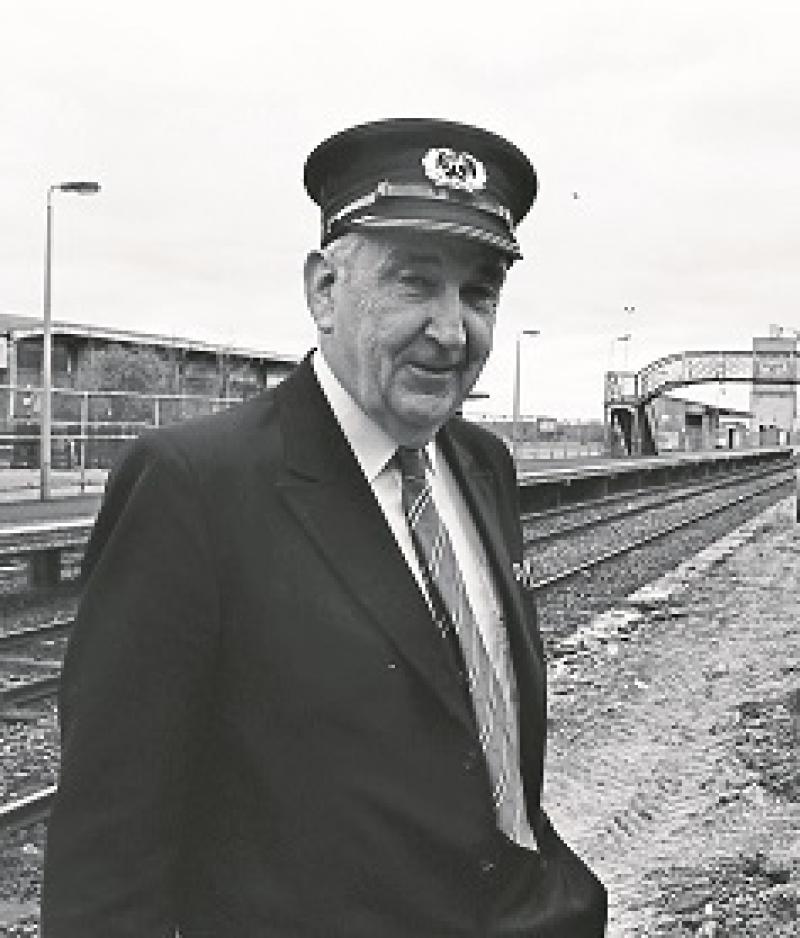 A love of all things trains characterised the life of the late Joe Craig, retired stationmaster who died in Tullamore earlier this month.
Joe was born into a railway family and developed a love of trains, in particular steam engines, as a young boy when helping his father, who was stationmaster in Drumshanbo, Co. Leitrim.
He went to Tullamore in 1963 and retired as stationmaster in 1997 after a lifetime of service with the railways.
After his retirement, Joe remained a familiar figure in Tullamore and was regularly seen in the towncentre at evening time making his way to bridge games.
Born in 1932 in Carrick-on-Shannon he lived there until he was 12 when his father, William John moved
to Drumshanbo on his appointment as stationmaster.
William John joined the Midland Great Western Railway Company as a clerk in Ballinrobe in 1923. In an interview with the Tribune in 2004, just prior to the 150th anniversary of Tullamore railway station, Joe recalled moving to Drumshanbo as a young boy: “It was dark when we moved into the house and
when I got my first glimpse of the engine Isobel with the low catcher in front and the peculiar passenger coach with steps in front and rear I was enchanted.”
“After a while I got to know the engineer crews and was allowed to fire the engine and operate the regulator,” he remembered.
Joe recalled that on occasion a train might leave without something and he would have to cycle to Ballinamore with it secured to the handle bars of his bike.
While still a teenager Joe was a trained railway clerk though in his youth it appeared that a career as a
train driver might be his future.
The young Joe was prone to mischief and when his father was away on Saturdays he would unlock the wheels of a bogie (a wheeled under carriage) and put it on the track. On another occasion, he took possession of and drove a train without the consent of the driver who was on his day off!
In 1949, Joe officially began his career with the railway service and served in Carrick-on-Shannon, Ballisodare, Sligo, Boyle, Dromod, Ballinamore, Ballyconnell, Longford and Wexford before moving to
Tullamore in the early 1960s.
In Longford he worked as a clerk alongside future Taoiseach, the late Albert Reynolds.
Joe arrived in Tullamore as stationmaster on October 16 1963 at the height of the beet season. Tullamore and Clara were very busy train stations with six clerical and 50 outdoor staff on the payroll.
At the time freight traffic was very important to both stations with Joe witnessing its decline during his time in Tullamore.
Joe retired in 1997 and enjoyed a healthy and active retirement.
In a tribute on their website, Offaly History Society, said: “Joe knew everything about trains and even had the power to stop them, as he did for the late Michael Dowling who needed to get a connection to Wexford from Tullamore for a Credit Union League AGM. Joe had the train held in Dublin to accommodate the man from Tullamore on credit union business in a voluntary capacity.”
Joe gave a lecture at the society during Heritage Week in 2013, the 50th anniversary of his appointment as stationmaster in Tullamore.
He passed away peacefully on August 12 last at the South Westmeath Hospice. His Funeral Mass was celebrated in the Church of the Assumption, Tullamore with burial afterwards to
Clonminch Cemetery.
Predeceased by his wife, Noelie, brothers Liam, Kieran and sister Maura, Joe is survived by his sons and
daughters Michael, Frances, Joe, Caroline, Fiona and Anne, grandchildren Austin, Aisling, Paul, Hilary and Conor. his brothers and sisters Martin, Anne, Philomena, Tom and Hilary, his daughters-in-law Mary and Clare, sons-in-law James and Ulf, extended family and friends to whom the deepest sympathy is extended.