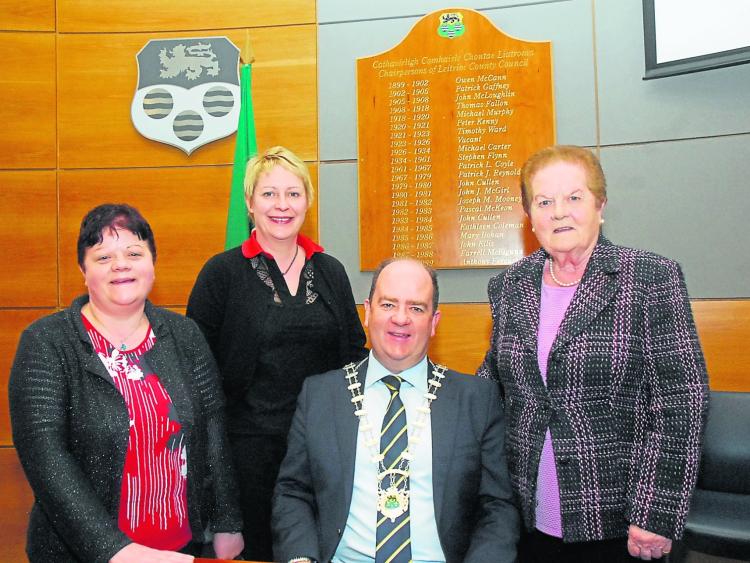 “The challenges we face as a county, over the next 12 months we will face and work to address to the very best of our ability,” vowed newly elected cathaoirleach of Leitrim Council, Cllr Enda McGloin at last Friday's first council meeting of the new term.
Cllr McGloin was voted in by a majority of 13 votes to two over Sinn Féin's Cllr Brendan Barry. Cllr Barry was nominated by party colleague, Cllr Padraig Fallon, who said he had made the proposal, “not with hope of getting a majority but because I believe it is in the public interest to do so”.
Cllr McGloin's nomination was put forward by Cllr Frank Dolan who described his Fine Gael colleague as “an able and articulate individual who has the experience and positive enthusiasm to represent Leitrim well.”
Cllr McGloin's nomination was seconded by Cllr Sean McGowan.
Taking up the chain of office from outgoing cathaoirleach, Cllr Sean McGowan, Cllr McGloin acknowledged this had been the end of a 'difficult week' for himself and his family, following the passing of his father.
“That's the emotions of life for you, you have good days and you have bad days,” he observed. It was a source of pride for him that his mother, sister and wife were able to be present in the chamber to witness his election to the chair.
“I wish to sincerely thank the members of Leitrim County Council for this honour. This is a great county and I am very proud to be from Leitrim,” he said.
Cllr McGloin, who was re-elected after losing his seat in 2014, said he wanted to ensure that Leitrim gets its 'fair share' in the next term of the council and said he was determined to encourage people to engage in good debate on issues.
Congratulating Cllr McGloin Fianna Fail's Mary Bohan said that her party had little doubt that Cllr McGloin would “be an excellent ambassador for the county”.
Best wishes were also extended on behalf of Sinn Féin by Cllr Padraig Fallon and Cllr Brendan Barry.
Independents Cllr Felim Gurn, Cllr Enda Stenson and Cllr Gerry Dolan also added their congratulations while Fine Gael's Cllr Sean McDermott noted his colleague “was very honourable” and a “tremendous loss at the last election when you lost your seat.”
Chief executive, Lar Power also assured the new cathaoirleach of the support of the staff and management of the council over the coming year. “You certainly wear the Leitrim jersey with pride,” he told Cllr McGloin.
Following this Cllr Sean McGowan was elected as leas cathaoirleach.