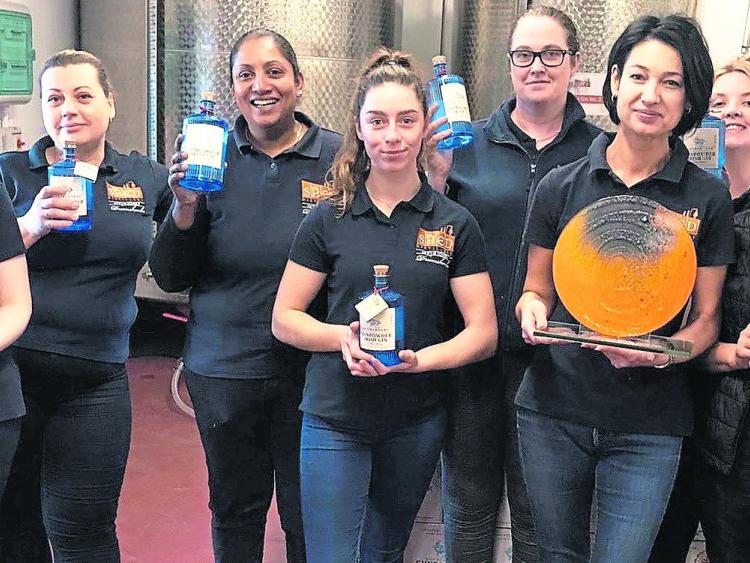 A team of workers at The Shed Distillery in Drumshanbo have put their skills in making world renowned gin and whiskey to the side for the time being as they have come to the country’s aid making alcohol based emergency sanitiser.

Speaking to the Leitrim Observer about the decision to transform operations at The Shed, the company’s managing director Pat Rigney explained: “It feels like six months ago but Monday of last week I began to realise that this thing was really serious and that we were in the position to make, let’s call it emergency sanitiser, using alcohol and purified water.

“We actually sterilise the distillery with alcohol, it is a sanitiser that goes back in time. It is one of the cleanest, safest ways of cleaning once it is above a certain level of alcohol.

“I saw what was coming and my immediate thought was could we do something for the Leitrim area initially, something very modest.”

The following day was a national holiday but Pat realised there was no time to waste and set about taking the next steps towards having the sanitisers ready for distribution.

With the graphics in place Pat then spoke to his colleagues at The Shed regarding what their next step should be and before he knew it the product was packaged and readied for distribution over the weekend.

“I spoke to Brian Taff and our head distiller and the team about what we might do, what we mightn’t do. We were planning to bottle today (Monday) but the thing developed and we could see this thing was developing into a war and a real emergency.

“I spoke to the team and made the request on Friday, knowing that we had labels and packaging and the semblance of what we were going to do, ‘could we actually start bottling and packaging sanitiser on Saturday?’

“The team turned around and said yes. They came in on Saturday, the ladies, particularly who are mothers, gave up mother’s day and we started to pack over the weekend.”

The next step was distribution with the initial aim of supplying to the Drumshanbo area before branching out further.

“On Sunday evening we put a load of product together for Fergal McPartland because Fergal knows all the people in need around Drumshanbo. We put product together for the Leitrim Association for People with Disabilities, Childhood Days, Meals on Wheels. There are other people that they would know would need sanitisers so we put a big pack together for all of those people.

“We then put an initial amount into Gala and Centra and Cara Pharmacy in Drumshanbo.

“We are supplying Leitrim County Council so they can keep the staff going. We sent some to the Garda station in Carrick-on-Shannon for distribution to the guards. We’ll go further afield later this week in Leitrim.”

As well as looking after local concerns, Pat explained The Shed have been overwhelmed by the volume of requests for sanitisers they have received from all locations.

“We’re inundated with requests from all sorts of needy places including a company in Galway making ventilators. They need sanitiser so we are going to supply them.

“We are supplying sanitisers from some hospitals, that wouldn’t be the main hospitals, and HSE staff for personal use.”
Elaborating further on the demand for The Shed made sanitiser Pat said it would be impossible to satisfy the demand.

“I got a bit of a surprise when we put something up on our social media to say that we were going to do something.

“The response shook me to my core because even if we were working flat out we could not possibly have filled the need.”

The business model operated by The Shed is an unusual one but these are unusual times with Pat explaining the product is either being given away or being sold at cost price.

Pat was eager to pay tribute to all who helped The Shed begin distribution of the sanitiser products as quickly as proved to be the case.

“We managed to flip it, put it together and the team has worked incredibly hard. I’d like to thank the team at the distillery.

“I also want to pay tribute to Leitrim County Council for going with us on it. I want to thank Revenue in Sligo for coming back on St Patrick’s Day, that bought us two days because some of the label companies are closing so you can’t get labels. We’re only at it three days but we’ll continue at it all week and next week and the week after and for as long as is necessary.”

Attempting to finish on a positive note Pat insisted that when the crisis passes there will be a real cause for celebration.

“One of the things I really want to get across is that when this is all over we are going to have some party!”