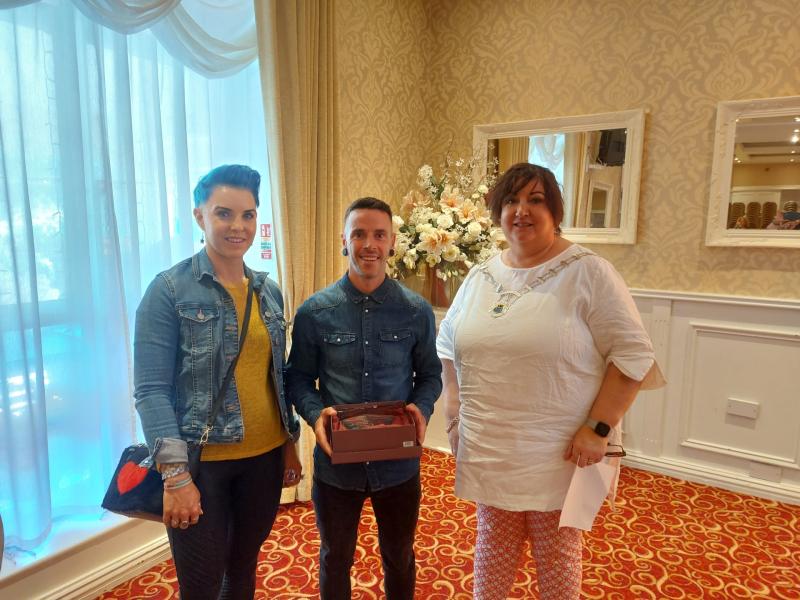 World Record breaker, Ricki Wynne, said he was “blown away” after he received a special presentation from Leitrim County Council in honour of his sporting achievements,
The Drumshanbo athlete was joined by his wife Triona at the September meeting of the County Council in the Bush Hotel on Monday.
Making the presentation to Ricki, Cathaoirleach Cllr Ita Reynolds Flynn described the endurance athlete's record breaking achievement in June this year where he completed 15 ascents and descents of Croagh Patrick in 24 hours.
“To put this in context, the tallest mountain on earth, Mount Everest, is 8,850m tall. So it's fair to say that Ricki climbed the equivalent of Mt Everest one and a half times - in 24 hours”.
She said “not only did Ricki break a world record but he also used this as an opportunity to help raise over €35,000 for the Irish Motor Neurone Disease Association. In its own right, a significant fundraising achievement,” she said.
Since his record-breaking achievement, the Cathaoirleach noted that the endurance runner “has not rested on his laurels”.
“In July he broke the record of the fastest ever completion of the 56km 'Leitrim Way' and just two weeks ago he completed an arduous 110km race through the alps in Chamonix, France as part of the UTMB Mont Blanc running event,” she added before making a special presentation to Ricki on behalf of the Council.
Accepting the honour a clearly delighted Ricki said “I am blown away, this is unbelievable”.
“Thanks a million for all of your support,” he told those at the meeting.
“I am 39 years of age and some think that in your 30s you're finished but I am only just getting started,” he said.
“While I have this body, it may only be 5 ft 2, but it's pretty powerful and my mind is pretty powerful.”